Aethelthryth or Etheldreda (about 636 – June 23, 679) was an Anglo-Saxon saint. She was also an East Anglian princess and Abbess of Ely.

Aethelthryth was born in East Anglia (now Suffolk). She was one of the four daughters of Anna of East Anglia. All of these women became nuns and founded abbeys.

She was a beautiful young girl who wanted to devote herself to the Church and took a vow to remain a virgin. When the princips Tondberht of the South Gyrwas. asked for her hand in marriage her parents said yes, but Aethelthryth refused. Though she was married she resolved to keep her solomn vow. Upon his death in 655, she retired to the Isle of Ely, which she had received from her husband as a gift.

Aethelthryth was then married to Ecgfrith of Northumbria in 660. Ecgfrith was a younger son of King Oswiu of Northumbria and his wife Enfleda. Shortly after Ecgfrith became king, Aethelthryth asked her husband if she could become a nun. She was encouraged by Bishop Wilfrid to remain celibate. This caused friction between Ecgfrith and Bishop Wilfrid. One story tells that Ecgfrith first agreed that she should continue to remain a virgin but in about 672 he wished to have an heir. He tried to bribe Wilfrid to convince the queen to give him an heir. This failed and the king tried to take his queen from her convent. She fled back to Ely with two nuns and managed to evade capture. The legend says that she escaped due to the miraculous rising of the tide. Another version of the legend stated that she stopped on the journey at 'Stow' and hid under an ash tree which suddenly came from her staff after she planted it in the ground. This came to be known as 'St Aethelthryth 's Stow', when a church was built to commemorate this event. Stow Minster contains a stained glass window that portrays the legend. Ecgfrith later married Eormenburg and expelled Wilfrid from his kingdom in 678. According to the Anglo-Saxon Chronicle, Aethelthryth founded a double monastery at Ely in 673, which was later destroyed in the Danish invasion of 870. She lived at St. Ely for the remainder of her life in pious devotion. She died of the plague. There is a hymn that was written in her honor.

Aethelthryth's niece and her great-niece, both of whom were royal princesses, succeeded her as abbess of Ely. 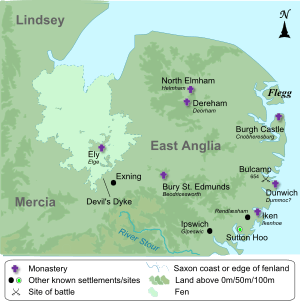 Bede and The Liber Eliensis describe how in 695, Aethelthryth's body was dug up by her sister Seaxburth, to be transferred from a common grave to the new church at Ely. She had been dead sixteen years. When her body was exhumed it was said to have been just as it was when she was alive. She was reburied in a white, marble coffin. Aethelthryth's uncorrupted body and clothes were said to have miraculous powers. A burial chamber made of white marble was taken from the Roman ruins at Grantchester, which was found to be the right fit for Aethelthryth. Seaxburh supervised the preparation of her sister's body, which was washed and wrapped in new robes before being reburied. Seaxburgh apparently oversaw the transference of her sister's remains without the supervision of her bishop, using her knowledge gained from her family's links.

St Etheldreda's Church is dedicated to the saint. It was originally part of the palace of the Bishops of Ely. In later years the palace was used by the Spanish Ambassadors, enabling Roman Catholic worship to continue in the church. It is now a Roman Catholic parish church in Ely, Cambridgeshire. It is part of the Diocese of East Anglia within the Province of Westminster. The church contains the shrine and relics of Aethelthryth.

All content from Kiddle encyclopedia articles (including the article images and facts) can be freely used under Attribution-ShareAlike license, unless stated otherwise. Cite this article:
Aethelthryth Facts for Kids. Kiddle Encyclopedia.