Wulfhere of Mercia facts for kids 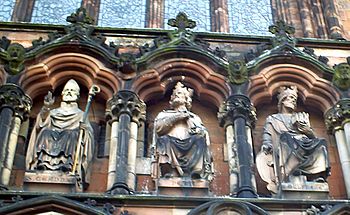 Statues of Bishop Chad of Mercia, Kings Peada and Wulfhere at the Lichfield Cathedral

Wulfhere or Wulfar ( 675) was an early King of Mercia. Although his father was pagan Wulfhere was a Christian. His older brother Peada ruled Mercia south of the River Thames under Oswiu of Northumbria. When Peada was murdered Oswiu held Mercia until the ealdormen of Mercia rebelled and placed Wulfhere on the throne. Wulfhere ruled Mercia from 658 until his death. He was the first Mercian (overlord) of England.

Wulfhere was a younger son of King Penda. His older brother Peada accepted Christianity to marry the daughter of King Oswiu of Northumbria. After their father was killed by Oswiu, Peada was set up as a king of southern Mercia. Peada's wife murdered him within five months. Oswiu then took control of all Mercia and ruled it three years. The Mercian ealdormen Immin, Eafa and Eadbert rose up in rebellion against king Oswiu. Wulfhere, who had been kept hidden, was then proclaimed king. Wulfhere had little opposition from Oswiu as he was dealing with a rebellion in Northumbria. Wulfhere began building alliances with other kings in the south of England. His first may have been in about 660 when he married Ermenilda, the daughter of King Eorcenberht of Kent and his wife Seaxburh. About this same time he expanded Mercia to the west. He brought Shropshire and Herfordshire under his control. The kings of Essex submitted to his rule by 665. 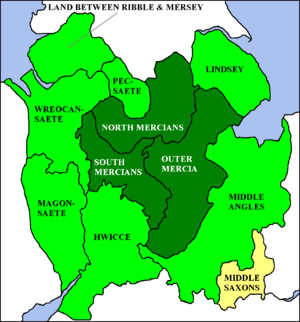 Map of Mercia and vassal kingdoms.

By the time Oswiu died in 670 Wulfhere was the overlord of most of southern England. He installed Bishop Wine in London after he was expelled from Wessex by king Cenwalh. While Wulfhere did not directly control East Anglia he controlled Lindsey and Essex. By controlling all the surrounding lands, he probably forced East Anglia into a treaty. Wulfhere then made Athelwalh recognize his overlordship in Sussex. He expelled the West Saxons from Sussex and eastern Hampshire. Expanding to the east he made his Frithuwold King of Surrey in 670. When King Ecgberht of Kent died in 673 Wulfhere became the guardian of his two sons Eadric and Wihtred. He then ruled Kent through them. With Wulfhere's support, Theodore, the Archbishop of Canterbury presided over the Synod of Hertford in 673. In 674 Wulfhere decided to attack Northumbria. Oswiu's son Ecgfrith of Northumbria had put down a rebellion by the Picts when he became king. Wulfhere formed an alliance of most of the southern kings with the exception of Wessex. The southern alliance under Wulfhere was defeated by Ecgfrith in battle. While Wulfhere survived he was forced to pay to Ecgfrith. He soon lost his authority in Kent. Possibly in revenge for not joining him in fighting Northumbria, Wulfhere attacked Wessex. He was defeated by King Aescwine of Wessex in 674. Wulfhere died in early 675. He was succeeded as king by his brother Aethelred.

By his wife Ermenilda, he had:

All content from Kiddle encyclopedia articles (including the article images and facts) can be freely used under Attribution-ShareAlike license, unless stated otherwise. Cite this article:
Wulfhere of Mercia Facts for Kids. Kiddle Encyclopedia.