Kids Encyclopedia Facts
This is about the English town. For the Indian town, see Thane. For the Nepali village, see Thame, Nepal.

Thame is a market town and civil parish in Oxfordshire, about 9 miles (14 km) east of the city of Oxford and 7 miles (11 km) southwest of the Buckinghamshire town of Aylesbury. It derives its toponym from the River Thame which flows along the north side of the town. The parish includes the hamlet of Moreton south of the town. The 2011 Census recorded the parish's population as 11,561.

Thame was founded in the Anglo-Saxon era and was in the kingdom of Wessex. 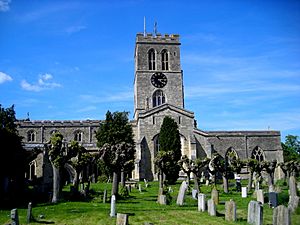 Thame Abbey was founded in 1138 for the Cistercian Order: the abbey church was consecrated in 1145. In the 16th century Dissolution of the Monasteries the abbey was suppressed and the church demolished. Thame Park (the house) was built on the site, incorporating parts of the abbey including the early-16th-century abbot's house. Its interior is one of the earliest examples of the Italian Renaissance in England. A Georgian west wing was added in the 18th century. In about 1840 parts of the foundations of the abbey church were excavated: it was 77 yards (70 m) long and 23 yards (21 m) wide, with a Lady Chapel extending a further 15 yards (14 m) at the east end.

The earliest feature of the Church of England parish church of Mary the Virgin is the 12th-century base of the font. The font's octagonal bowl was re-cut in the 13th century. The present church is a cruciform building that was built in the 13th century. The chancel is Early English Gothic and was built in about 1220, with six lancet windows in its north wall and presumably a similar arrangement in the south wall. It was twice altered in the next few decades: a three-light plate tracery window was inserted in its north wall in the mid-13th century and the five-light east window with geometrical tracery was inserted in about 1280. Whatever lancet windows may have been in the chancel south wall were replaced with three two-light Decorated Gothic windows with reticulated tracery, and a double piscina was added at the same time.

The transepts and tower arches are also early 13th century. The nave has five-bay north and south aisles whose arcades were built in about 1260. The aisles were widened in the 14th century, when they acquired their Decorated Gothic windows and doors. The Decorated Gothic south porch has two storeys and a two-bay quadripartite vault.

The Perpendicular Gothic clerestory is 14th or early 15th century. In the 15th century the tower piers were strengthened and the two upper stages of the tower were built. In 1442 the north transept was rebuilt with five-light Perpendicular Gothic north and east windows with panel tracery. At about the same time the south transept acquired similar windows and was extended eastwards to form a chapel with a 15th-century piscina. The Perpendicular Gothic nave west window was inserted in 1672–73, making it an example of Gothic survival. In 1838 the north aisle north wall was rebuilt under the direction of George Wilkinson.

The tower has a ring of eight bells, all cast by Mears and Stainbank of the Whitechapel Bell Foundry in 1876.

The Prebendal House is known to have existed by 1234, The Early English Gothic chapel was built in about 1250. The solar is also 13th-century but was enlarged in the 14th, when the present crown-post roof was added. The rest of the Prebendal House dates is 15th centuries. The hall is 14th-century in plan but was later divided, and one part now has a fine 15th-century roof. In 1661 the antiquary Anthony Wood reported that the house was ruinous, and early in the 19th century the remains were in use as a farmhouse and barns. It was restored in 1836. The Prebendal House was the home of singer/songwriter Robin Gibb and his wife Dwina from 1984, and Gibb is buried in St Mary's parish churchyard. 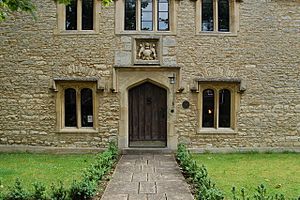 Entrance of the original grammar school building, completed in 1569

In 1550 the courtier John Williams, 1st Baron Williams of Thame built the almshouses in Church Lane. He died in 1559, and his will established the local grammar school. Its original building, completed in 1569, stands next to the almshouses. In 1880 the school moved to its current premises in Oxford Road. In 1971 it became a comprehensive school under the name Lord Williams's School.

The Civil War in the 1640s saw Thame occupied in turn by Royalists and by Parliamentarians. After the Battle of Chalgrove Field in 1643, Colonel John Hampden, who had been educated at the grammar school, died of his wounds at the house of Ezekiel Browne, later to become the Greyhound Inn. As of 2010[update] some of Hampden's descendants still live in the town.

The champion bare-knuckle boxer James Figg was born in Thame in 1684 and had his early prize-fights at the Greyhound Inn. In the 21st century the Greyhound Inn was renamed the James Figg and in April 2011 the Oxfordshire Blue Plaques Board unveiled a blue plaque there to commemorate him. 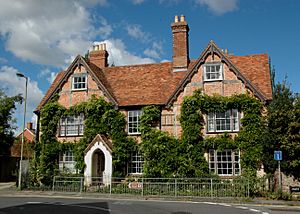 By 1813 Thame had a workhouse in Wellington Street. In 1826 John Boddington, a miller who had been the proprietor of Thame Mill, became master of the workhouse. In 1831 his son, also John Boddington, became a clerk at Strangeways Brewery in Manchester. A younger son, Henry Boddington, who had been born at Thame Mill in 1813, followed his brother and joined the same brewery in 1832. Henry became a partner in the business in 1847 and sole proprietor in 1853, after which its beers were called Boddingtons. In April 2011 the Oxfordshire Blue Plaques Board unveiled a blue plaque at the address of the former workhouse commemorating its association with Henry Boddington.

Thame Poor Law Union was established in 1835 and the following year a new workhouse designed by George Wilkinson was built on Oxford Road. In the 20th century the building became the premises of Rycotewood College of further education. In 2003 with two other colleges of further education to form Oxford and Cherwell College, now City of Oxford College.

Thame railway station was opened in 1862 as the temporary terminus of an extension of the Wycombe Railway from High Wycombe. The extension was completed in 1864 when it reached Oxford. In 1963 British Railways withdrew passenger services between Princes Risborough and Oxford and closed Thame station, leaving Princes Risborough (7 miles) as the nearest passenger station until 1987 (see below) BR dismantled the track between Thame and Morris Cowley, but kept the line between Thame and Princes Risborough open for goods traffic to and from an oil depot in Thame.

Thame Town Hall was designed by the architect H.J. Tollit in Jacobethan style and built in 1888.

In 1940 Willocks McKenzie, a local lorry driver, found a small hoard of late Mediaeval coins and rings beside the River Thame. The coins were ten groats and the rings were five ornate examples ranging from the 14th to the 16th centuries. The county Coroner declared them to be treasure trove and therefore Crown property. The Crown placed the hoard on permanent loan to the Ashmolean Museum. The most ornate ring was an ecclesiastical one incorporating a small reliquary. Its lid is decorated with a distinctive cross with two horizontal sections, similar to the Cross of Lorraine. Thame Town Council incorporated this cross into its town emblem.

In 1974 the M40 motorway was extended from High Wycombe to Chilworth Farm at Great Milton. Junction 7 at Milton Common is about 3 miles (5 km) southwest of Thame, giving the town a fast road link to London. In 1990 the M40 extension was completed, giving Thame a fast road link to Birmingham.

In 1991 Thame oil depot closed, and BR dismantled the railway between Thame and Princes Risborough. Sustrans was allowed to re-use the former trackbed to create the Phoenix Trail which is part of National Cycle Network route 57. Reopening the rail line through Thame was an option considered by Chiltern Railways in their plan to open a direct rail route from London Marylebone to Oxford via Princes Risborough in 2015. The cost of reinstating bridges was considered prohibitive.

ITV used Thame many times as a location for the Midsomer Murders drama series.

Thame is twinned with Montesson in France and Sinaia in Romania.

All content from Kiddle encyclopedia articles (including the article images and facts) can be freely used under Attribution-ShareAlike license, unless stated otherwise. Cite this article:
Thame Facts for Kids. Kiddle Encyclopedia.