Dissolution of the Monasteries facts for kids 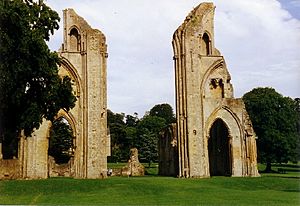 The ruins of Glastonbury Abbey, dissolved in 1539 following the execution of the abbot

The Dissolution of the Monasteries, sometimes referred to as the Suppression of the Monasteries, was the set of administrative and legal processes between 1536 and 1541 by which Henry VIII disbanded Catholic monasteries, priories, convents and friaries in England, Wales and Ireland, appropriated their income, disposed of their assets, and reassigned or dismissed their former members and functions. Although the policy was originally envisaged as increasing the regular income of the Crown, much former monastic property was sold off to fund Henry's military campaigns in the 1540s. He was given the authority to do this in England and Wales by the Act of Supremacy, passed by Parliament in 1534, which made him Supreme Head of the Church in England, thus separating England from Papal authority, and by the First Suppression Act (1536) and the Second Suppression Act (1539).

All content from Kiddle encyclopedia articles (including the article images and facts) can be freely used under Attribution-ShareAlike license, unless stated otherwise. Cite this article:
Dissolution of the Monasteries Facts for Kids. Kiddle Encyclopedia.