Kingdom of Sussex facts for kids

The Kingdom of the South Saxons, today referred to as the Kingdom of Sussex was one of the seven traditional kingdoms of the Heptarchy of Anglo-Saxon England. On the south coast of the island of Great Britain, it was originally a sixth century Saxon colony and later an independent kingdom. The South Saxons were ruled by the kings of Sussex until the country was annexed by Wessex, probably in 827, in the aftermath of the Battle of Ellandun.

At the end of the 4th century there was a decline in the birth rate across Roman Britain; this population decrease would have been made worse by the transfer to Continental Europe of three large armies, recruited in Britain in the last 30 years of Roman rule, as well as plague and barbarian attack. 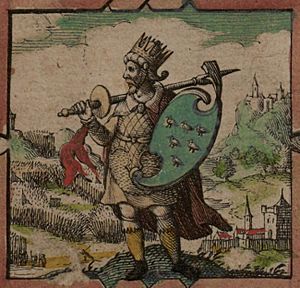 Depiction of Ælle holding a shield with a design representing Sussex

The earliest recorded Viking raid on Sussex took place in 895 and it was particularly difficult for a scattered farming community to meet these sudden attacks. In 895 the population of Chichester killed many hundreds of Danes who plundered the area. Eadulf, a Saxon noble, was appointed to organise the defence of Sussex but died from the plague before much could be done.

The population of Britain as a whole is likely to have declined sharply around the 4th century from around 2–4 million in AD 200 to less than 1 million in AD 300. There would have been a similarly sharp decline in the population of Sussex during this period. Sussex's population around 450 is estimated to have been no more than about 25,000, rising gradually to around 35,000 by 1100. At the time of the Domesday Book in 1086, Sussex had some of the highest population densities in England. 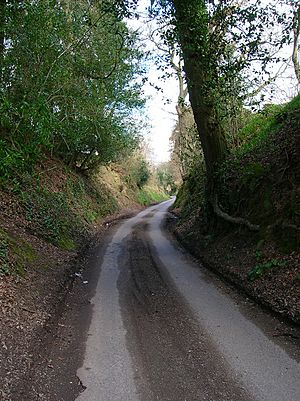 There is significant evidence for Frankish cultural influence on the kingdom of Sussex as well as the neighbouring kingdom of Kent; occasional references in Continental works suggest that Frankish kings may at one point have thought of the people of Sussex and other south eastern kingdoms as their political dependants. 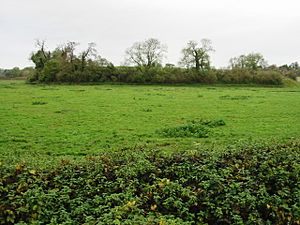 Remains of the Burh wall at Burpham

However alternative status symbols were used fully in Sussex by those with higher status. Archaeological evidence shows that luxury food items were consumed in Sussex and luxurious architectural displays were constructed, such as a tower excavated at Bishopstone.

From the beginning of the 6th century, Merovingian artefacts were present in Sussex, as they were in Kent and on the Isle of Wight, which is thought to reflect cross-Channel exchanges between Saxon Sussex and Merovingian Gaul. Cemeteries show continuous contacts with Gaul from the first half of the 5th century until the early 7th century.

All content from Kiddle encyclopedia articles (including the article images and facts) can be freely used under Attribution-ShareAlike license, unless stated otherwise. Cite this article:
Kingdom of Sussex Facts for Kids. Kiddle Encyclopedia.