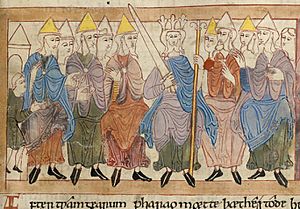 The Witenagemot or Witan was an institution in Anglo-Saxon England, from about the 7th to the 11th century. The name is Old English and means council of the wise men. Originally, Witan was the plural of wita (the wise man); but it was used as a singular. The council was similar to the Germanic assembly called Thing.

The purpose of the Witenagemot was to give an opinion about the administration and the organisation of the kingdom. They talked about how law should develop. They elected or confirmed the king. The Witenagemot also had the power to depose a king. This happened when they deposed Sigeberht of Wessex in 755. They also deposed Æthelwald Moll of Northumbria in 765. Witans were held at least once a year; usually more often. In many respects they were similar to modern-day Parliament. Unlike Parliament, the locations where they were held changed; neither the Witans nor the king had a permanent place to stay.

When the Normans invaded England in 1066, they replaced the Witenagemot with another institution. This institution was still known as Witan or Witenagemot until the 12th century.

All content from Kiddle encyclopedia articles (including the article images and facts) can be freely used under Attribution-ShareAlike license, unless stated otherwise. Cite this article:
Witenagemot Facts for Kids. Kiddle Encyclopedia.