Kids Encyclopedia Facts
For The village in Suffolk, see Lindsey. 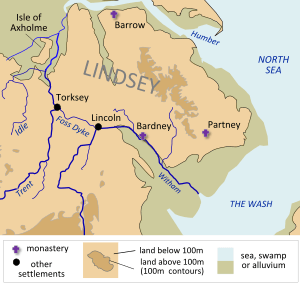 The kingdom of Lindsey

The Kingdom of Lindsey was in approximately what is now Lincolnshire. At the time of the Roman conquest of Britain, it was a part of the territory of the Corieltauvi tribe. Lindsey appears in the 7th century list called the Tribal Hidage, where it is shown to be the same size as Essex and Sussex, all of which were set at 7,000 hides. It was a lesser Anglo-Saxon kingdom which was disputed over by Northumbria and Mercia. It ceased to exist as an independent kingdom during the reign of Offa of Mercia.

Lindsey was between the River Humber on the north and the Witham on the south. To the east lay the North Sea and the west border was the River Trent. The Roman canal called Foss Dyke connected the Witham with the Trent on the southwestern border. Also to the west was Hatfield Chase, a low lying area of marshes. This meant Lindsey was completely surrounded by water. This led to the popular belief that Lindsey was an Island.

The name Lindsey comes from the word Lindissi (also spelled Lindesse and Lindesig). Lindsey is a British name and not an Old English (or the Anglo-Saxon language) name. Lindsey was an Anglo-Saxon kingdom but it had a strong Celtic population. Lindsey seems to have been an independent kingdom with its own Celtic rulers for a time. It came under the control of Northumbria from c. 620–658. Then it was subject to Mercia from c. 658–c. 675. It returned to Northumbrian control again from c. 675–679. In 679 it was taken over by Mercia. Its kings were reduced in rank to Ealdormen.

The conversion to Christianity in Lindsey began c. 631 by Paulinus. Bishop Wilfrid was appointed the bishop of Northumbria, which included Lindsey, in 665. After a delay, he was installed as bishop in 669. When he was expelled from Northumbria in 678, his diocese was divided up. Archbishop Theodore formed Lindsey into a separate diocese with its own bishop. According to the Anglo-Saxon Chronicle, in the year 678 Eadhed was the first bishop of Lindsey. In the 9th century, the Danes (Vikings) colonized Lindsey. This marked the end of the diocese of Lindsey.

Haethfieldlande or Hatfield was another minor Anglo-Saxon kingdom listed in the Tribal Hidage. Very little is known about Hatfield and nothing of its kings. Unlike other petty kingdoms in this area of Britain, the name here is of Anglo-Saxon origin and not British. According to the Tribal Hidage, 'Hatfield-land' was merged with Lindsey into a single kingdom. Afterwards it became known simply as Hatfield Chase, an area on the west part of Lindsey, later part of Yorkshire and Lincolnshire. Hatfield was the site of a synod held by Theodore, the Archbishop of Canterbury c. 680. It was a royal residence of several kings of Northumbria. Edwin of Northumbria was killed here at the Battle of Hatfield Chase on 12 October 633. Later, Hatfield became a part of the East Riding of Yorkshire.

The Anglian collection is a collection of royal genealogies and regnal lists. It was put together during the reign of Alhred of Northumbria (765-774). It records the kings of Deira and Bernicia (which became Northumberland), Mercia, Lindsey, Kent, East Anglia and Wessex. These genealogies all trace back to Woden. The most trustworthy name in the Lindsey genealogy is Caedbaed, according to most modern historians. The family of Aldfrið is also considered fairly certain. The other names are simply from the list with little or no additional information. The list of kings of Lindsey begins with:

None of dates are certain. With regard to Aldfrith, the witness list for an Anglo-Saxon charter includes an "Ealfrid rex". This dates to some time between 787 and 796.

All content from Kiddle encyclopedia articles (including the article images and facts) can be freely used under Attribution-ShareAlike license, unless stated otherwise. Cite this article:
Lindsey (kingdom) Facts for Kids. Kiddle Encyclopedia.