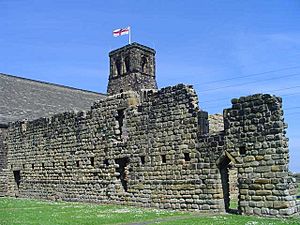 Ruins of the original Monastery at Jarrow in front of the current St Paul's Church.

Monkwearmouth–Jarrow was a combination of two English monasteries run as a single community. Both were founded by Benedict Biscop. Monkwearmouth, built first, was a magnificent example of the Roman style of architecture. It housed one of the first stained glass works in England. Jarrow became the center of Anglo-Saxon learning in the north of England and contained the largest library in Anglo-Saxon England. Bede, the great Anglo-Saxon scholar, studied, taught and wrote there. The sister Anglo-Saxon monasteries were the UK nomination for World Heritage Site status in 2011.

In 674 Benedict Biscop, a Northumbrian nobleman, built a monastery known as Monkwearmouth. Egfrith, King of Northumbria gave him fifty hides of land at the mouth of the River Wear. This monastery would be dedicated to Saint Peter and came to be called St. Peter's at Monkwearmouth. Benedict wanted his monastery to be a center of both learning and religion. Benedict used Frankish stonemasons who he brought over to England to construct the monastery. Monkwearmouth was the first (and Jarrow the second) church structures to be built of stone in England. Benedict them brought over glassmakers from Frankia to fit the windows of the church and chapels with fine stained glass. They established a workshop there at Monkwearwolf. Within a year the monastery was completed. In 678 a letter from Pope Agatho exempted the monastery from external control. Benedict got all the , sacred vessels, decorations and . Some he found locally while others he bought in Francia and Rome. In 682 King Egfrith gave another forty hides of land to Benedict for a second monastery. It was to be at the mouth of the River Trent at Jarrow. The dedication ceremony for Jarrow abbey was held on 23 April 685. Named for Saint Paul when the sister monastery was completed Benedict assigned Ceolfrith to the abbot. Bede, who was about ten years old at the time, was one of the monks who went with him. King Egfrid, who was at the dedication, died in battle against the Picts less than a month later. The two sister abbeys, only seven miles apart, were thought of as one. 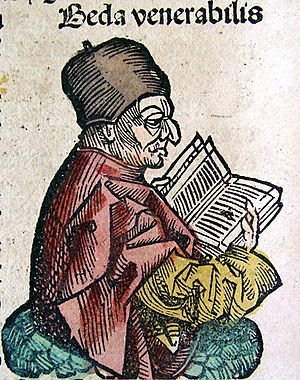 The library that Benedict started made it possible for Bede to write his works including his famous Ecclesiastical History of the English People.information from. There wasn't another library like it in England. By the time of his death in 689 Benedict had completed four trips to Rome and the south and brought back large collections of books each time. The full extent of Bede's work would still not be possible if not for Ceolfrid, the fourth abbot. He doubled the size of the library left by Benedict Biscop.

The at Monkwearmouth-Jarrow was kept very busy. There was a growing demand for copies of bibles, books, documents and especially the works of Bede. Requests came in from other parts of England and the . Works from the scriptorium would be found in Leningrad, Rome, and other parts of Europe. Under increasing requests for its products, the Monkwearmouth-Jarrow scriptorium adopted a faster script style used in later works.

In 794, just a year after the Vikings sacked Lindisfarne, the Vikings attacked Monkwearmouth and Jarrow. The flames were so hot the glass was melted. Both sites were abandoned for a time. Their location on the coast of Northumbria made them easy targets for Viking raids. The twin monasteries were rebuilt. Unlike many old ruins that disappear over time, the old walls of Monkwearmouth and Jarrow can still be seen. They are next to or part of the modern buildings that replaced the original buildings built in 674 and 682.

All content from Kiddle encyclopedia articles (including the article images and facts) can be freely used under Attribution-ShareAlike license, unless stated otherwise. Cite this article:
Monkwearmouth–Jarrow Abbey Facts for Kids. Kiddle Encyclopedia.