Alcester is a market town and civil parish of Roman origin at the junction of the River Alne and River Arrow in Warwickshire, England. It is situated approximately 8 miles (13 km) west of Stratford-upon-Avon, and 8 miles south of Redditch, close to the Worcestershire border. The 2011 census recorded a population of 6,273 in the town, up slightly from 6,214 in 2001.

The poet and antiquary John Leland wrote in his Itinerary (ca. 1538-43) that the name Alcester was derived from that of the River Alne. The suffix 'cester' is derived from the Saxon word ceaster, which meant a Roman fort or town.

Alcester was founded by the Romans in around AD 47 as a walled fort. The walled colonia named Alauna developed from the military camp. It was sited on Icknield Street (or Ryknild Street), a Roman road that ran the length of Britannia from the north east near Hadrian's Wall to southwest England. The town was also just north of the Fosse Way, another important thoroughfare in Roman Britain. Alauna, which was a busting market town, was within the commercial sphere of Salinae (modern day Droitwich Spa), where rock salt and brine was extracted and processed. Archaeological investigations shows the colonia had streets, temples and workshops. Investigations into Alcester's Roman history began with local businessman B.W. Davis in the 1920s. Recent excavations have shown that a substantial part of the Roman town was built outside its defensive walls in the 3rd century AD.

In the Early medieval period, Alencestre had become a Saxon market town in the Kingdom of Mercia.

Alcester was also the site of Alcester Abbey, a Benedictine monastery founded in 1138 by Ralph le Boteler. Richard de Tutbury, the last abbot, resigned his office in 1467 and Alcester Abbey was absorbed into the neighbouring Evesham Abbey. By 1515 Alcester Abbey was in ruins as a result of the neglect of various abbots, and later during the Dissolution of the Monasteries Henry VIII it was largely demolished. The ruins were granted to the local Greville family, who used much of the stone to rebuild their family seat of Beauchamp Court.

Today the town features architecture from the Medieval, Tudor, Georgian, Victorian and 20th century. The oldest house appears to be The Old Malthouse at the corner of Church Street and Malt Mill Lane, which probably dates from about 1500. The clock on St Nicholas Church (Grade 2*) is in an unusual position on the south-west corner of the 14th-century tower, making it visible from the High Street. The church also houses the tomb of Fulke Greville, grandfather of Fulke Greville, 1st Baron Brooke. The church's Georgian nave with Doric columns and plastered ceiling is believed to have been designed by Francis Smith of Warwick, supervisor of its rebuild by Woodward brothers of Chipping Camden in 1729.

Alcester was previously served by Alcester railway station belonging to the Midland Railway (later part of the London, Midland and Scottish Railway), on the Gloucester Loop Line, branching off the Birmingham and Gloucester Railway main line at Ashchurch, passing through Evesham railway station, Alcester and Redditch and rejoining the main line at Barnt Green, near Bromsgrove. The loop was built to address the fact that the main line bypassed most of the towns it might otherwise have served, but it took three separate companies to complete, Alcester being on the Evesham and Redditch Railway prior to absorption by the Midland.

In addition a branch line provided by the Alcester Railway company (later part of the Great Western Railway) ran from Alcester to Bearley, thus giving access to Stratford-upon-Avon. This line, however, was an early casualty, closing in September 1939. The Midland loop was due to close between Ashchurch and Redditch in June 1963 but the poor condition of the track led to all trains between Evesham and Redditch being withdrawn in October 1962 and replaced by a bus service for the final eight months. Redditch to Barnt Green remains open on the electrified Birmingham suburban network.

Alcester is served by buses from Redditch, Evesham and Stratford upon Avon.

Alcester is also known for two nearby stately homes. To the north is Coughton Court, the family seat of the Throckmorton baronets as well as a National Trust property. To the south-west is Ragley Hall, the home of the Marquis of Hertford, whose gardens contain a children's adventure playground. Kinwarton, which is just north of Alcester, contains a church of Anglo Saxon origin and a historic dovecote, Kinwarton Dovecote, which is also a National Trust property.

Alcester is also a significant town on the 100-mile-long Heart of England Way long-distance walking route.

Recent developments, carried out by a multi-agency partnership, include 'Roman Alcester', a museum exhibiting locally found archaeological artifacts from the 1st to 4th century AD.

In early June Alcester holds the Court Leet charity street market with a procession and competitions for best stall and best fancy dress.

On the first Monday and Tuesday in October Alcester holds an annual mop fair where amusement rides, side stalls and food booths line the High Street, Church Street and Henley Street. The mop fair has gradually decreased in size over a period of years, likely an external influence since the people of Alcester still flock to the streets during the two nights.

The Alcester and Forest of Arden Food Festival is held every May and October and attracts thousands of visitors who enjoy local quality food and produce.

The St Nicholas Night Fair is held on 6 December each year. 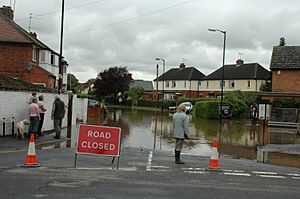 The rivers Arrow and Alne, which join on the outskirts of Alcester, have occasionally flooded and on a few occasions engulfed part of the town. The last occurrences were in 1956, 10 April 1998 (Maunday Thursday) and on 21 July 2007 when 200 homes were left uninhabitable.

In response to the severe flooding of 2007 Alcester flood scheme completed an underground storage tank with a 3.25 million litre capacity in June 2011, costing just over £1 million. The scheme attracted funding from the Regional Flood and Coastal Committee’s Local Levy with contributions from Warwickshire County Council, Stratford District Council and Alcester Town Council. The scheme included work on the two pumping stations located at Bleachfield Street and Gas House Lane.

All content from Kiddle encyclopedia articles (including the article images and facts) can be freely used under Attribution-ShareAlike license, unless stated otherwise. Cite this article:
Alcester Facts for Kids. Kiddle Encyclopedia.