For the fictional city in the works of M. John Harrison, see Viriconium.

Viroconium or Uriconium, formally Viroconium Cornoviorum, was a Roman town, one corner of which is now occupied by Wroxeter, a small village in Shropshire, England, about 5 miles (8.0 km) east-south-east of Shrewsbury. At its peak, Viroconium is estimated to have been the 4th-largest Roman settlement in Britain, a civitas with a population of more than 15,000. The settlement probably lasted until the end of the 7th century or the beginning of the 8th. Extensive remains can still be seen.

Viroconium is a Latinised form of a toponym that was reconstructed as Common Brittonic *Uiroconion ("[city] of *Uirokū". *Uirokū (lit. "man-wolf") is believed to have been a masculine given name meaning "werewolf".

The original capital of the local British tribe of the Cornovii was the impressive hillfort on the Wrekin known as *Uiroconion. When the Cornovii were eventually subdued by the Romans, their capital was moved to Wroxeter and given its Roman name. Hence the term "Cornoviorum" distinguishes the site as the Viroconium "of the Cornovii", the Celtic tribe whose settlement became civitas.

Wroxeter was first established in the early years of the Roman conquest of Britain as a frontier post for a cohort of Thracian Auxilia who were taking part in the campaigns of the governor, Publius Ostorius Scapula. The site is strategically located near the end of Watling Street, the primary Roman trunk road that ran across Britannia from Dubris (Dover). The post was a key frontier position because it defended the River Severn valley as it come out of Cambria (Wales) as well as protecting the route to the south that lead to the Wye valley.

In the mid 1st century Legio XIV Gemina took over the site from the Thracian Auxilia in preparation for the invasion of Wales and replaced the fort with a much larger legionary fortress. In 78 governor Gnaeus Julius Agricola led campaigns to suppress the tribes in North Wales and the druids on Ynys Môn. In 80 Agricola took Legio XIV Gemina north on his punitive expeditions against the Picts in Scotland. With the departure of Legio XIV Gemina, Legio XX Valeria Victrix took over the fortress.

By the late 80s the fort had ceased to be used by the Roman army after Legio XX Valeria Victrix moved to Deva Victrix. In this period the canabae, or civilian settlement, that had grown up around the legionary fort began turning it into a town. Archaeological research has found that an unfinished legionary bath house in the centre of the town eventually became the town's forum. A decade later a civic street grid was subsuming the plan of the old legionary fort.

The colonnaded forum was started in the 120s covering the unfinished bath house, and with the impressive dedicatory inscription to Hadrian found in excavations dating the completion to 130. By then the town had expanded especially under Emperor Hadrian to cover an area of more than 173 acres (70 ha). It then had many public buildings, including thermae. Simpler temples and shops have also been excavated. At its peak, Viroconium is estimated to have been the one of the richest and the fourth largest Roman settlement in Britain with a population of more than 15,000. Its wealth is surprising for what remained a frontier town and is perhaps explained by its access to Wales and to other trade routes.

Between 165-185 the forum burned down, including neighbouring shops and houses, and many shop contents were subsequently found in excavations. The forum was rebuilt with several modifications.

Following the end of Roman rule in Britain around 410, the Cornovii tribe divided into Pengwern (Shropshire) and Powys. This socio-political division started Viroconium's decline as an important settlement.

Although Viroconium served as the early sub-Roman capital of Powys, variously identified with the ancient Welsh cities of Cair Urnarc or Cair Guricon which appeared in the Historia Brittonum's list the 28 civitates of Britain.

Viroconium became the site of the court of a sub-Roman kingdom known as the Wrocensaete, which was the successor territorial unit to Cornovia. Wrocensaete means the ‘inhabitants of Wroxeter’.

The Wroxeter Stone or Cunorix Stone, was found in 1967, with an inscription in an Insular Celtic language, identified by the Celtic Inscribed Stones Project (CISP) at UCL as "partly-Latinized Primitive Irish". The inscription, probably on a re-used gravestone, is dated to 460-475 AD, when Irish raiders had begun to make permanent settlements in South Wales and south-western Britain.

Town life in Viroconium continued in the fifth century, but many of the buildings fell into disrepair. Between 530 and 570, when most Roman urban sites and villas in Britain were being abandoned, there was a substantial rebuilding programme. The old basilica was carefully demolished and replaced with new timber-framed buildings on rubble platforms. These probably included a very large two-storey building and a number of storage buildings and houses. In all, 33 new buildings were "carefully planned and executed" and "skillfully constructed to Roman measurements using a trained labour force". Who instigated this rebuilding programme is not known, but it may have been a bishop. Some of the buildings were renewed three times, and the community probably lasted about 75 years until, for some reason, many of the buildings were dismantled.

The site was probably abandoned peacefully in the second half of the seventh century or the beginning of the eighth. The later minor Wreocensæte sub-kingdom of the Angles emerged in the area when Oswiu conquered Pengwern in 656. Eventually the court of the Kingdom of Powys moved to Mathrafal sometime before 717 following famine and plague in its original location. 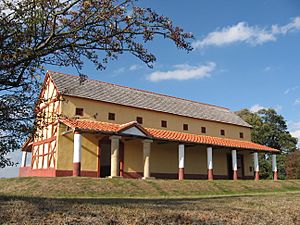 The recreation of a Roman town house at Viroconium

Although archaeologist Philip A. Barker believed stonework from Viroconium Cornoviorum was used to build the nearby parish churches of Atcham, Wroxeter, and Upton Magna, some substantial remains are still standing. These include "the Old Work" (an archway, part of the baths' frigidarium and the largest free-standing Roman ruin in England) and the remains of a baths complex. These are on display to the public and, along with a small museum, are looked after by English Heritage under the name "Wroxeter Roman City". Some of the more important finds are housed in the Music Hall Museum in Shrewsbury. Most of the town still remains buried, but it has largely been mapped through geophysical survey and aerial archaeology.

Archaeological research of the site is ongoing with further buildings being excavated.

In February 2011 a reconstructed Roman villa was opened to the public to give visitors an insight into Roman building techniques and how the Romans lived. A Channel 4 television series entitled Rome Wasn't Built in a Day showed how it was built using authentic ancient techniques. The builders were assisted by a team of local volunteers and supervised by archaeologist Dai Morgan Evans, who designed the villa.

All content from Kiddle encyclopedia articles (including the article images and facts) can be freely used under Attribution-ShareAlike license, unless stated otherwise. Cite this article:
Viroconium Cornoviorum Facts for Kids. Kiddle Encyclopedia.