Coria was a fort and town 2.5 miles (4.0 km) south of Hadrian's Wall, in the Roman province of Britannia at a point where a big Roman north–south road (Dere Street) bridged the River Tyne and met another Roman road (Stanegate), which ran east–west between Coria and Luguvalium (the modern Carlisle) in the Solway Plain. The full Latin name is uncertain. In English, it is known as Corchester or Corbridge Roman Site as it sits on the edge of the village of Corbridge in the English county of Northumberland. It is in the guardianship of English Heritage and is partially exposed as a visitor attraction, including a site museum.

The place-name appears in contemporary records as Corstopitum and Corie Lopocarium. These forms are generally recognised as corrupt. Suggested reconstructions include Coriosopitum, Corsopitum or Corsobetum. The Vindolanda tablets show that it was locally referred to by the simple form, Coria, the name for a local tribal centre. The suffix ought to represent the name of the local tribe, a member of the Brigantian confederation but its correct form is unknown. It gave its name to Corbridge, albeit by processes which are debated.

There is evidence of Iron Age round houses on the site but the first Romans in the area built the Red House Fort, 0.5 mi (0.80 km) to the west, as a supply camp for Agricola's campaigns. 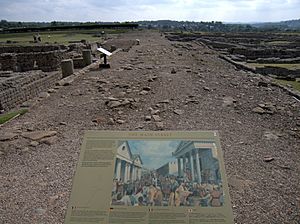 Soon after Roman victories in modern Scotland, around AD 84, a new fort was built on the site with turf ramparts and timber gates. Barrack blocks surrounded a headquarters building, a commander's residence, administrative staff accommodation, workshops and granaries. It was probably occupied by a 500-strong cavalry unit called the Ala Gallorum Petriana but burnt down in AD 105. A second timber fort was built, guarding an important crossing of the River Tyne, when the Solway Firth–Tyne divide was the Roman frontier. Around AD 120, when Hadrian's Wall was built, the fort was rebuilt again, probably to house infantry away from the Wall. About twenty years later, when the frontier was pushed further north and the Antonine Wall built, the first stone fort was erected under the Governor Quintus Lollius Urbicus.

English Heritage has released monographs on the forts along Hadrian's Wall through the Archaeology Data Service. Bishop and Dore's report on the excavations at Corbridge 1947–80 reveal the complex history of the sequence of mainly earth and timber forts which preceded the masonry buildings.(available here) The reports also cover a metal hoard found within the fort, possibly linked to the abandonment between AD 122 and 138 (also available on the Archaeology Data Service website).

Between 1906-1914, the site was excavated following a desire by the Northumberland County History Committee to assess the Roman remains at Corbridge ahead of a book on the history of the parish, overseen by Francis J. Haverfield. During that time, a number of scholars from Oxford University were sent by Haverfield to supervise local labourers tasked with the actual excavation, including J.P. Bushe-Fox and Leonard Woolley, making it one of the first training excavations in British archaeology. Brian Dobson later ran adult training excavations at Corbridge in the 1960s and 1970s. 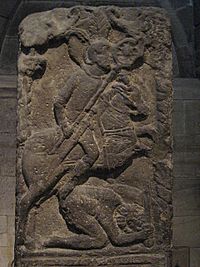 Tombstone of Flavinus, a Roman Standard Bearer, on display in Hexham Abbey.

Work on Hexham Abbey in 1881 brought to light a Roman funerary monument in the stonework of the south porch of the transept. An elaborately carved stone (now on display in the abbey) shows a standard-bearer in the Roman cavalry riding down a barbarian: its inscription shows it to commemorate Flavinus, an officer in the ala Petriana who died aged 25 after seven years' service. The ala Petriana is known to have been stationed at Corbridge, and the slab is thought to date to the late first century and to have once stood in the military cemetery near the fort there.

All content from Kiddle encyclopedia articles (including the article images and facts) can be freely used under Attribution-ShareAlike license, unless stated otherwise. Cite this article:
Coria (Corbridge) Facts for Kids. Kiddle Encyclopedia.