Upper Norwood is an area of south-east London within the London Boroughs of Bromley, Croydon, Lambeth and Southwark. It is located north of Croydon and is synonymous with the Crystal Palace area.

Upper Norwood is situated along the London clay ridge known as Beulah Hill. Most housing dates from the 19th and 20th centuries, with large detached properties along the ridge and smaller, semi-detached and terraced dwellings on the slopes. There are some more modern areas of social housing that date from the 1970s. The hill offers panoramic views northward to central London and southward to central Croydon and the North Downs. 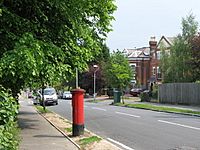 A misty day on Central Hill, Upper Norwood. To the right of the line of parked cars is the chapel of Virgo Fidelis Roman Catholic Girls' School.

The area is one of the highest in the London area, and for centuries was occupied by the Great North Wood, an extensive area of natural oak forest which formed a wilderness close to the southern edge of the ever-expanding city of London. The name "Norwood" is a contraction of "North Wood". Local legend has it that Sir Francis Drake's ship, The Golden Hind, was made from timber cut from trees in this area. The forest was a popular area for Londoners' recreation until the 19th century, when it began to be built over. It was also a haunt of Gypsies, with many local street names and pubs recording the link, notably Gipsy Hill. The area still retains woodland in large amounts for an urban area.

The Beulah Hill ridge was used as a sighting-point for the Anglo-French Survey (1784–1790), which measured the precise distance between the Royal Greenwich Observatory and the Paris Observatory, using trigonometry. It was particularly useful for this purpose on account of both its height and its relative proximity to Greenwich.

In 1831, one of England's most prominent architects, Decimus Burton, designed a spa and pleasure gardens below Beulah Hill and off what is now Spa Hill in a bowl of land on the south facing side of the hill around a spring of chalybeate water. Burton was responsible for the Beulah Spa Hotel (demolished c1935) and the layout of the grounds. Its official title was The Royal Beulah Spa and Gardens. It became a popular society venue attracting large crowds to its fêtes. One widely publicized event was a "Grand Scottish Fete" on 16 September 1834 "with a tightrope performance by Pablo Fanque," the black circus performer who would later dominate the Victorian circus and achieve immortality in The Beatles song, Being for the Benefit of Mr. Kite! The spa closed in 1856 soon after the opening nearby of The Crystal Palace.

The Crystal Palace was rebuilt nearby on Sydenham Hill in 1854, following its success at The Great Exhibition of 1851 in Hyde Park. It was destroyed in a spectacular fire in 1936. The importance of this building led to the area immediately around the Crystal Palace becoming known as Crystal Palace.

Virgo Fidelis Convent Senior School is a Roman Catholic girls school located on Central Hill and was founded in 1848. It occupies an eighteenth century grand house once the home of the notable socialite and courtesan Mary Nesbitt. 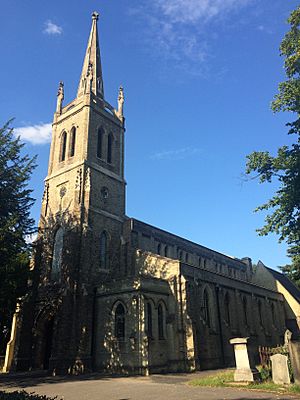 All Saints' Church, an Anglican parish church at Upper Norwood.

The Church of England Parish Church of St John the Evangelist on Sylvan Road, completed in 1887, is a notable example of the work of the architect John Loughborough Pearson. Designed in the Gothic Revival style, this Grade II* listed red brick building features some significant interior stone decoration and a stained glass window by Ninian Comper, who lived in the area.

A notable park in the area is Upper Norwood Recreation Ground. Its 19-acre (77,000 m2) site is part of the Harold Road Conservation Area. Its boundary is defined by Chevening Road, Hermitage Road, Eversley Road and Harold Road. One of London's hidden rivers, River Effra flows under the park and at the Harold Road end a well head exists. It was covered in the 1940s.

In March 1966, shortly before the World Cup tournament, the Jules Rimet trophy was stolen from an exhibition at Central Hall Westminster. It was found seven days later in Beulah Hill by a dog named "Pickles". The story made national headlines.

In 1985 a Safeway supermarket opened on Westow Street. In 1990 the exterior of this branch featured in a clip of the television drama series Grange Hill. The store was acquired by Morrisons in March 2004, who closed it in November 2005. The lease of the vacant store was purchased by Sainsbury's in August 2006.

The hilly nature of the land has restricted the construction of railways through the district. The former branch line terminus at Crystal Palace High Level railway station which opened in 1865 closed in 1954, and the remaining Crystal Palace railway station is situated some distance below Upper Norwood and approached by many steps. However, Crystal Palace Parade remains an important bus interchange and many residents instead use plentiful local bus routes to travel to West Norwood, Tulse Hill, Streatham, West Dulwich or Norbury railway stations. The disconnection from the capital's rail/tube network has led to it having lower house prices than other areas possessing scenic views of London.

All content from Kiddle encyclopedia articles (including the article images and facts) can be freely used under Attribution-ShareAlike license, unless stated otherwise. Cite this article:
Upper Norwood Facts for Kids. Kiddle Encyclopedia.