Anerley is an area of south east London, within the London Borough of Bromley. It is located west of Bromley and is 7.0 miles (11 km) south south-east of Charing Cross. The district is the former site of The Crystal Palace. 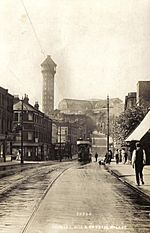 Anerley has never existed as an independent entity, but rather as a general area. Prior to the enclosure and the relocation of the Crystal Palace to Penge Place at the top of Sydenham Hill, Anerley was an unoccupied part of Penge Common, and did not develop until the 19th century. The government Act of 1827 stipulated that a 50 feet (15 metres) wide, new road, was to be set out from Elmers End Road to what is now Church Road, Upper Norwood. In 1827, a Scottish silk manufacturer named William Sanderson bought land on the former Penge Common, he built the first house in the area, which he named "Anerly", a Scottish word meaning "solitary" or "only", and the road subsequently became known as Anerley Road, also giving the name to the surrounding area. William Sanderson's name is the first to appear in the first rate book, dated 18 June 1827, now held in the Anerley Town Hall.

The Croydon Canal was opened on 22 October 1809, and passed through Anerley. The canal only lasted 27 years, and proved to be a financial failure and was sold to the London and Croydon Railway Company, for £40,250. London and Croydon Railway would use much of the former canal for the new railway line, with remnants remaining in Betts Park in Anerley and in Dacres Wood, Sydenham. The railway deviated from the canal course entering a new cutting near what is now Anerley railway station (opened on 5 June 1839 and named initially as Annerley Bridge Station). William Sanderson made land available in return for the creation of the railway station adjacent to his house "Anerly". Isambard Kingdom Brunel built an atmospheric railway along this course in 1845, but it was short lived. The inability to include points on an atmospheric railway resulted in the construction of flyovers one of which runs through Anerley between Crystal Palace railway station and Sydenham railway station.

A train collision occurred at Anerley on 5 October 1844; 24 people were injured, although there were no fatalities. The driver was found to be at fault, along with a lack of tail lights. The report stated: "The second tram passed the Jolly Sailor Station (now Norwood Junction) about three minutes after the first, the green light being then exhibited there as a signal to go on with caution; and on approaching the Anerley Station, the engineman of this train observed a red light on the signal post, which was the signal to stop at that station; but not seeing the red light that ought to have been exhibited in the rear of the preceding train, he considered it was gone, and just as it was slowly quitting the station he ran into it, but with diminished speed" 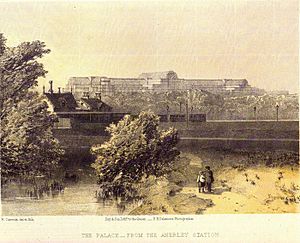 Anerley Gardens, around 1860, Anerley Railway Station and The Crystal Palace can be seen in the Background

Admission Ticket to the Anerley Gardens 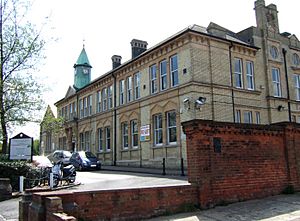 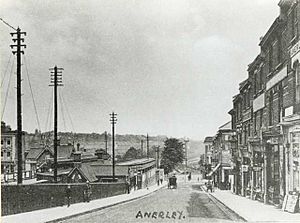 Anerley Gardens opened in 1841, and provided entertainment to the growing 19th century leisure industry. With the new medium of rail travel and boasting its own station, Anerley become a desirable social venue. With regular dances, a boating lake, the Anerley Hotel (now the site of the Anerley Arms), Swiss cottage, Maze, or just to enjoy the "tranquil" gardens. The Gardens closed in 1868, from competition from the nearby The Crystal Palace.

From the 1860s the residential area developed, grand Victorian houses were built along Anerley Road, and Anerley formed part of the Parish of St Paul's, forming in 1861. Anerley Vestry Hall (Anerley Town hall) was built in 1878 for the sum of £4,341, to conduct public business for the area. It became a Town hall as a result of the London Government Act 1899, thus in 1900 becoming part of the Penge Urban District of Kent. The Hall was enlarged in 1911 for the sum of £3,229 and contained offices, a public hall, the council chamber, committee rooms, and a petty sessional court opened in 1925. By the beginning of the 20th Century, Anerley, like the now known area of Crystal Palace was in decline with much of the grand Victorian houses converted into flats, and by the middle of the century housing estates constructed. Anerley became part of the London Borough of Bromley in 1965. With the demise of the local government ward of Anerley, the name Anerley is mainly applied to the area in the proximity of the railway station, to the top of Anerley Hill Road and down to the Birkbeck station border divide with London and Kent. The SE20 postcode district was officially named Anerley but covered Anerley, Penge and parts of Beckenham.

During World War II Anerley suffered extensive bomb damage, with five V1 Rockets landing, a further six landed in Crystal Palace Park and a total of 23 in the whole SE20 district. On 18 June 1944 it was reported a V1 Rocket was being chased by a Spitfire, and then shot down by AA gun fire. The shot down V1 fell upon Anerley Park near the junction of Anerley road. 2 People were killed and the damage to property were 3 houses destroyed with a further 20 houses severely damaged. On 11 July 1944 the third V1 Rocket strike to hit Anerley landed on Anerley Road at the Junction with Crystal Palace railway station. People had heard the rocket cut out and ran for cover, with many failing to find any, killing 11 People. The Shops on Station road were totally destroyed, on Anerley road 18 shops were demolished, 8 shops and 7 houses severely damaged and 84 houses with minor damage. The Paxton Arms pub was also partially destroyed and would not re-open until 1955. The last rocket would strike Anerley 24 August 1944. 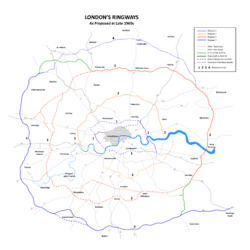 Two A roads, the A213 and A214 pass through the area. During the late 1960s and 1970s the A214 was to be part of the London Ringways project. The A214 was to become Ringway 2 and it would have passed through much of Anerley, and have followed the railway line from Birkbeck station and travelled north. The construction of the A214 into the planned London Motorways network (much like the A2 or Hammersmith flyover London section today), would have seen a lot of destruction of property in Anerley and a great increase in noise pollution. After much consultation and Government dithering the various London Ringway projects were cancelled, including the A214 section.

In the era of street trams, a tramway ran down Anerley Road, turning into Croydon Road. It joined the main tram network at West Croydon. In the early days a stationary engine was needed to haul trams up the steepest part of Anerley Hill. Later models were able to climb unassisted, but special gearing was designed exclusively for this route. The tramway was replaced by trolley buses on route 654 which operated until 1959.

Transport for London had proposed the extension of Tramlink services from Harrington Road tram stop to the bus station on Crystal Palace Parade via Anerley Road and a consultation exercise finished in December 2006. However Mayor Boris Johnson cancelled the 170 million pound extension in November 2008.

All content from Kiddle encyclopedia articles (including the article images and facts) can be freely used under Attribution-ShareAlike license, unless stated otherwise. Cite this article:
Anerley Facts for Kids. Kiddle Encyclopedia.