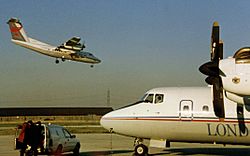 de Havilland Canada Dash 7 makes its steep approach to LCY from the west as another London City Airways DHC-7 prepares to leave for Amsterdam.

London City Airport is a single-runway airport, intended for use by STOL (short take-off and landing) planes, mainly serving the financial districts of London. It is on a former Docklands site, in the London Borough of Newham in East London. It is near Canary Wharf and the O2 arena in an area called Silvertown.

The airport serves European destinations, though there is one flight to New York JFK airport.

The airport has tough rules to limit the noise from aircraft operations. This limits the aircraft types that can be used, and so does the length of the runway and the steep glideslope. The steep 5.5 degree approache requires special training for crew. Only multi-engine, fixed-wing aircraft with special crew and aircraft certification can operate at London City Airport. London City Airport has a CAA Public Use Aerodrome Licence (Number P728).

The airport has produced a master plan outlining their vision for growth up to 2030. The plan shows a phased expansion of the airport to a maximum capacity of 8 million passengers per annum, without the addition of a second runway, or significant expansion of the current airport boundaries.

London City Airport was purchased in October 2006 by a consortium comprising AIG Financial Products Corp. and Global Infrastructure Partners (GIP) for an undisclosed sum. Speculation suggests the sale was valued at over £750 million. In 2007, London City Airport had 2.9 million passengers; by 2017 this had risen to 4,530,439.

All content from Kiddle encyclopedia articles (including the article images and facts) can be freely used under Attribution-ShareAlike license, unless stated otherwise. Cite this article:
London City Airport Facts for Kids. Kiddle Encyclopedia.