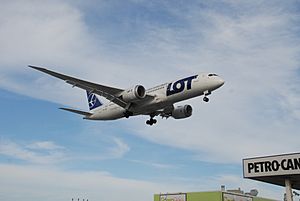 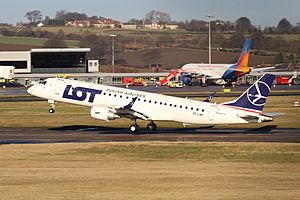 LOT Polish Airlines is the national airline of Poland. It began in 1928 after the merger of all Polish airlines. The airline's main hub is at Warsaw Chopin Airport. LOT is a member of the Star Alliance.

All content from Kiddle encyclopedia articles (including the article images and facts) can be freely used under Attribution-ShareAlike license, unless stated otherwise. Cite this article:
LOT Polish Airlines Facts for Kids. Kiddle Encyclopedia.