Antonov An-26 facts for kids 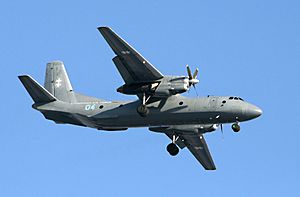 Lithuanian air force An-26 in flight.

The Antonov An-26 is soviet built twin-engine transport aircraft. It is used by both airlines and air forces. It is a short takeoff and landing aircraft.

It is built under licence in China like Y-7H. An-26 is a modernized variant of An-24.

All content from Kiddle encyclopedia articles (including the article images and facts) can be freely used under Attribution-ShareAlike license, unless stated otherwise. Cite this article:
Antonov An-26 Facts for Kids. Kiddle Encyclopedia.