The Millennium Dome looking over the River Thames 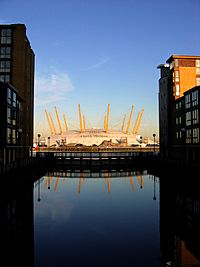 The Millennium Dome in daylight

The Millennium Dome is a large dome-shaped building in Greenwich in South East London, UK. It was built in 1997/2000 to celebrate the beginning of the third millennium. The name was officially changed to The O2 when Telefónica O2 Europe plc bought the naming rights from the developers, Anschutz Entertainment Group.

From 31 December 1999 until 31 December 2000 the Dome and some surrounding buildings were the home of the Millennium Exhibition which was meant to show the best of Britain to the world. The most successful part of the Exhibition was the stage show that was held two or three times each day in the middle of the dome. The show had dozens of dancers and acrobats, music by Peter Gabriel, and a tower that rose out of the dome's floor.

The rest of the Exhibition was not as successful as the Dome's owners had hoped. About 6 and a half million people visited the Exhibition, which was only half the number its owners hoped for.

The dome was sold to US Anschutz Entertainment Group (AEG) and reopened in July 2007 as the O2, an entertainment complex including a 22,000 seat concert and sports venue, cinema, music club and exhibition spaces. Among the first artists to perform there were Bon Jovi and Prince. The Rolling Stones performed there in August 2007, Led Zeppelin played a reunion show there in December 2007, and the Spice Girls took residence in the arena from December 2007 to January 2008.

In 2012, as part of the Summer Olympics in London, the building was renamed the "North Greenwich Arena" and was used to host gymnastics and basketball.

A walkway across the top of the dome's structure has been opened, allowing visitors to cross the roof at a height of 60m. The O2 Roofwalk tourist attraction is now partially powered by solar energy.

All content from Kiddle encyclopedia articles (including the article images and facts) can be freely used under Attribution-ShareAlike license, unless stated otherwise. Cite this article:
Millennium Dome Facts for Kids. Kiddle Encyclopedia.