Kids Encyclopedia Facts
This page is about the dock in London. For other uses, see King George V Dock (disambiguation). 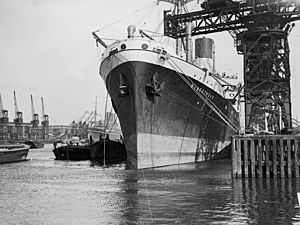 King George V Dock is one of three docks in the Royal Docks of east London, now part of the redeveloped Docklands.

Begun in 1912 by the Port of London Authority, the King George V was the last of London's upstream enclosed docks to be built. After delay by the First World War, construction was completed in 1921. Although at 64 acres (26 ha) of water it was smaller than the other royals, it had its own entrance from the Thames through a lock and bascule bridge. The dock could berth liners as large as the RMS Mauretania. At its western end was a large graving dock (since filled in) and machine shop used for ship repairs by Harland and Wolff. It closed to commercial traffic along with the other Royal Docks in the 1980s.

The dock's major feature today is London City Airport, whose single runway has been built the length of the north side of the dock. The western end of the dock has been filled in and the airport terminal built on the filled area. The rest of the dock is still in water, acting as a buffer between the airport runway and the surrounding area. The southern quayside has been cleared of dock buildings and is now largely used as car parking for the airport.

King George V station on the London City Airport branch of the Docklands Light Railway, which opened in December 2005, is named after the dock.

All content from Kiddle encyclopedia articles (including the article images and facts) can be freely used under Attribution-ShareAlike license, unless stated otherwise. Cite this article:
King George V Dock, London Facts for Kids. Kiddle Encyclopedia.