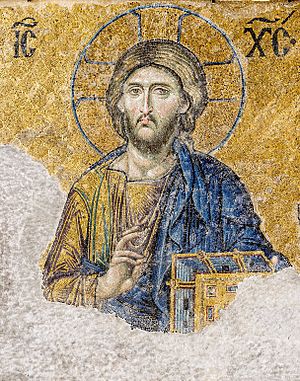 Icon of Christ in the Hagia Sophia

Byzantine art means the Christian Greek art of the Eastern Roman Empire from about the 5th century until the Fall of Constantinople in 1453. (The Roman Empire during this period is known as the Byzantine Empire.)

But the term can also be for other the art of countries who shared their culture with the Byzantine Empire. This can include Bulgaria, Serbia, and Rus. The Republic of Venice and Kingdom of Sicily, can also be included even though they were part of western European culture. Art produced by Balkan and Anatolian Christians who lived in the Ottoman Empire is often called "post-Byzantine." Certain traditions that began in the Byzantine Empire, particularly icon painting and church architecture, are still current in Greece, Russia and other Eastern Orthodox countries.

All content from Kiddle encyclopedia articles (including the article images and facts) can be freely used under Attribution-ShareAlike license, unless stated otherwise. Cite this article:
Byzantine art Facts for Kids. Kiddle Encyclopedia.