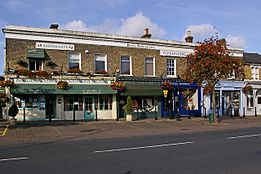 Chislehurst is a suburban district in south-east London, England, within the London Borough of Bromley. It lies east of Bromley, south-west of Sidcup and north-west of Orpington, and c. 10 miles (16 km) south-east of Charing Cross, the traditional centre of London. Prior to the creation of Greater London in 1965, Chislehurst was in the administrative county of Kent.

The name "Chislehurst" is derived from the Saxon words cisel 'gravel', and hyrst 'wooded hill'. 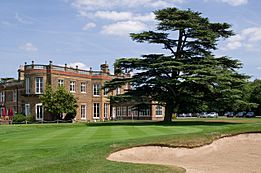 Camden Place (now Chislehurst Golf Club, 51° 24′ 40.05″N 0° 3′ 55.69″E ) takes its name from the antiquary William Camden, who lived in the former house on the site from c.1609 until his death in 1623. The present house was built shortly before 1717, and was given a number of additions in the late 18th and very early 19th centuries by the architect George Dance the younger. In about 1760, the house and estate were bought by Charles Pratt, the Attorney General, and later Lord Chancellor. Pratt was ennobled in 1765, taking the title Baron Camden, of Camden Place: in 1786 he was created Earl Camden. A later occupant of the house, from 1871 until his death there in 1873, was the exiled French Emperor, Napoleon III. His body and that of the Prince Imperial were originally buried in St Mary's Church, before being removed to St Michael's Abbey, Farnborough. The Emperor's widow, the Empress Eugénie, remained at Camden Place until 1885. There is a memorial to Napoléon Eugène on Chislehurst Common, and the area's connections with the imperial family are found in many road names and in the local telephone code, 467, which in its earlier format corresponded to the letters IMP (for imperial).

Chislehurst Common (and nearby St Paul's Cray Common) were saved from development in 1888 following campaigns by local residents. They were a popular destination for bank holiday trips in the early 20th century, and now provide a valuable green space. Nearby Petts Wood, Hawkwood and Scadbury have also been preserved as open spaces following local campaigns.

The Chislehurst civil parish formed an urban district of Kent from 1894 to 1934. In 1934 it became part of the Chislehurst and Sidcup Urban District, which was split in 1965 between the London boroughs of Bromley and Bexley.

Chislehurst is home to the Derwent House, designed by William Willett.

The Walsingham family, including Christopher Marlowe's patron, Sir Thomas Walsingham and Queen Elizabeth I's spymaster, Francis Walsingham, had a home in Scadbury Park, now a nature reserve in which the ruins of the house can still be seen.

A water tower used to straddle the road from Chislehurst to Bromley until it was demolished in 1963 as one of the last acts of the Chislehurst and Sidcup UDC. It marked the entrance to the Wythes Estate in Bickley, but its narrow archway meant that double-decker buses were not able to be used on the route. 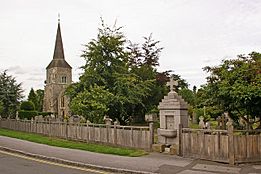 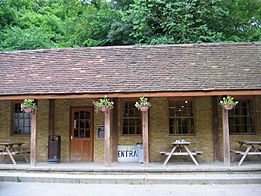 Chislehurst is regarded as an affluent area and one of the most expensive places to live in South East London. Chislehurst West may be found by going towards Mottingham and this area includes the biggest of the ponds and the High Street which has many pubs and restaurants. Chislehurst West was previously known as "Pricking" and "Prickend".

A local attraction is Chislehurst Caves. The caves are considered to be of very ancient origin. They were originally used to mine flint and chalk. During World War II, thousands of people used them nightly as an air raid shelter. There is even a chapel. One child was born in the caves during World War II, and was given a middle name of 'Cavena'. The caves have also been used as a venue for live music; Jimi Hendrix, the Who and the Rolling Stones have all played there. The caves are reputedly haunted, and Druids are said to have made grisly human sacrifices in their depths. A number of television programmes and films, including episodes of Doctor Who, have been filmed there. Tours are available most days, and on Sundays there used to be an extended tour, lasting approximately one and a half hours, although this no longer takes place. Tours are normally on the hour. There is a licensed bar and café at the caves.

Chislehurst is one of the starting points for the Green Chain Walk, linking to places such as Crystal Palace, Erith, the Thames Barrier and Thamesmead.

Chislehurst station links the area with National Rail services to London Charing Cross and to Sevenoaks via Orpington. 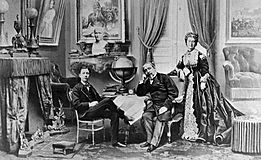 Louis-Napoleon Bonaparte with his wife Eugénie de Montijo and their son in exile in Chislehurst, 1872.

All content from Kiddle encyclopedia articles (including the article images and facts) can be freely used under Attribution-ShareAlike license, unless stated otherwise. Cite this article:
Chislehurst Facts for Kids. Kiddle Encyclopedia.