Petts Wood is a suburb of south east London, England and is a part of the London Borough of Bromley. It lies north west of Orpington.

The name appeared first in 1577 as "the wood of the Pett family", who were shipbuilders and leased the wood as a source of timber. William Willett, a campaigner for daylight saving time, lived in nearby Chislehurst for most of his life, and is commemorated by a memorial sundial in the wood. The Daylight Inn in the suburb of Petts Wood is named in his honour. Petts Wood has a second pub (The Sovereign of the Seas) and a railway station. It is situated between Orpington and Bickley. The Jubilee Country Park is located to the northwest of the main shopping area and is home to several rare species of animal life. Before this park was created, the area was known as 'The Gun Sites', as it had been the location for anti-aircraft guns in WW2, and was the home of the 1st Petts Wood scout group.

Most of Petts Wood was built in the early 20th century by the developer Basil Scruby together with Master builder, Noel Rees, as a high quality estate in a rural setting only a short train journey from the city, with the east side being built first: it is often quoted in sociological textbooks as a classic piece of 1920s town planning, as the first building in place was the station, and the rest of the town developed from there. 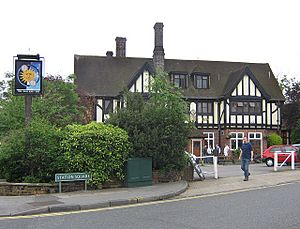 The generally higher quality of large homes built to the east of the railway line, as compared to smaller and more dense to the west, gave rise to the local references of "Half Crown" or "Five Bob" sides.

Noel Rees's name is still used as a selling point by estate agents; his houses can be found in Great Thrift, The Covert, Prince's Avenue, Wood Ride, Kingsway, Chislehurst Road, The Chenies and many other roads in Petts Wood.
The area between Petts Wood and Bickley sustained heavy bombing during World War II because of its proximity to an important railway junction. Charles de Gaulle, leader of the Free French and future President of France, lived in Petts Wood, at 41 Birchwood Road, for part of the Second World War. Another prominent resident of Birchwood Road was the Welsh Baritone Sir Geraint Evans, and the toastmaster Ivor Spencer also lived nearby.

Many residents of Petts Wood worked in Fleet Street, as it was the most affordable area with the latest last train for them to catch home after putting the morning's papers to bed (see Keith Waterhouse, "Streets Ahead").

The wood itself survives and is managed by the National Trust. Originally just 88 acres (36 hectares) were bought by public subscription and donated to the Trust in 1927. This asset expanded when the neighbouring Hawkwood Estate and Edlmann Wood, comprising a further 250 acres (100 hectares), were donated to the Trust by landowners Robert and Francesca Hall in 1957. The woodland features oak, birch, rowan, alder, ash, hornbeam and sweet chestnut.

In 2009, the local Woolworths had the privilege of writing the last word in the history of that chain in the UK, when its manager, realising his was the last one to close, gathered the remains of the Pick-and-Mix sweet section and auctioned the bagful of sweets, which would normally have retailed for a couple of pounds, for £14,500 ($20,000).

All content from Kiddle encyclopedia articles (including the article images and facts) can be freely used under Attribution-ShareAlike license, unless stated otherwise. Cite this article:
Petts Wood Facts for Kids. Kiddle Encyclopedia.