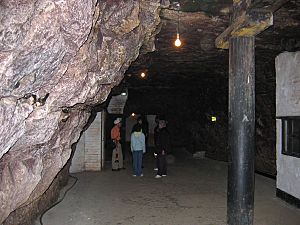 Chislehurst Caves are a series of intersecting man-made tunnels and caverns covering some 22 miles (35.4km) in Chislehurst in southeast London, England. From the mid-13th to early 19th centuries the 'caves' were created from the mining of flint and lime-burning chalk.

Today the caves are a tourist attraction and although they are called caves, they are entirely man-made and were dug and used as chalk and flint mines. The earliest recorded mention of the mines and lime-burning kilns above dates from a 9th-century Saxon charter and then not again until around 1232AD; they are believed to have been last worked in the 1830s.

During World War I the caves were used as an ammunition storage dump associated with the Royal Arsenal at Woolwich. In the 1930s the tunnels were used for mushroom cultivation.

When the aerial bombardment of London began in September 1940, the caves were used as an air-raid shelter. Soon they became an underground city accommodating up to 15,000 inhabitants (who each paid a penny to enter). The tunnels were fitted with electric lighting, toilets and washing facilities; a chapel was built and also a hospital.

The caves were located close to Chislehurst railway station and many people arrived there to then enter the shelter. Shortly after VE Day the shelter was officially closed. There has been only one child born in the caves, christened in the cave chapel with the unfortunate name of Cavena Wakeman, who endured the name until she turned 18, when she legally changed her first name to Rose and using Cavena as her middle name.

In 1903, William Nichols, then Vice President of the British Archaeological Association, produced a theory that the mines were made by the Druids, Romans and Saxons. This theory was used to give names to the three parts of the caves: tour guides point out supposed Druid altars and Roman features. However this is based on Dr Nichols' writings.

The earliest documented evidence for a Chalk Cave is in 1737. (However the earliest recorded mention of the mines and lime-burning kilns above, dates from a 9th-century Saxon charter and then not again until around 1232AD, this being that most likely because there was no taxation on them prior to 1232AD) An opposing article in the next issue showed the similarity of the workings to coal mines in the Newcastle area, and argued that most of the excavation had been made in the last two centuries and that the evidence for any dene-holes was slight. However a dene-hole does exist in what is known as the middle section.

The caves were used between 1830 and the 1860s for producing lime. The 25-inch to a mile (approx 1:2,500) Ordnance Survey map of 1862–63 describes the place as a "chalk pit" and marks an "engine house" and two remaining kilns. A further investigation produced, among other evidence, a letter from the son of one of the workers.

The caves have appeared in several television programmes including episodes of Doctor Who from 1972 titled The Mutants. In an episode of Seven Natural Wonders presented by Bill Oddie, the caves were presented as one of the wonders of the London area. The caves were also used in the films Beat Girl, The Tribe and Inseminoid and in music videos for metal bands Iron Maiden - (Can I Play With Madness) - and Cradle of Filth. They appear in Episode Five of The Tyrant King, 1968.

The caves featured in two episodes of Most Haunted. A 20-year investigation into the haunting of the caves by author James Wilkinson containing the testimonies of many of the guides and owners over a 50-year period was published in 2011 entitled The Ghosts of Chislehurst Caves.

Eric Burdon & The Animals played there on 6 October 1967.

Other bands said to have played there were the Rolling Stones, Status Quo, Pretty Things & the Troggs.

On 31 October 1974, a lavish media party was held in the caves by the band Led Zeppelin to celebrate the launch of new UK record company Swan Song Records.

Radio Caroline ran some gigs on a Saturday night with DJs like Dave Lee Travis, Johnnie Walker, Tony Blackburn and Simon Dee, who would bring down music acts such as Muddy Waters.

One of the last concerts down in the Caves was on 9 January 1981 when four Bromley bands (11.53. Five O, Hepatitis Risk & Real Colmans) played there. The Music aspect of the caves completely stopped in 2000 with The Rock & Roll gypsies being the last band to perform in January 2001.

All content from Kiddle encyclopedia articles (including the article images and facts) can be freely used under Attribution-ShareAlike license, unless stated otherwise. Cite this article:
Chislehurst Caves Facts for Kids. Kiddle Encyclopedia.