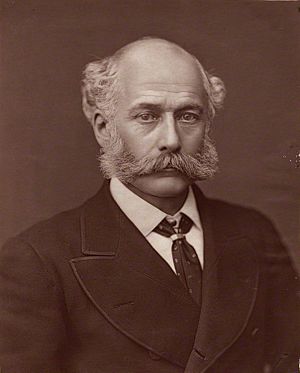 Joseph Bazalgette in the 1870s

Sir Joseph William Bazalgette, CB ( 28 March 1819 – 15 March 1891) was a 19th-century English civil engineer. As chief engineer of London's Metropolitan Board of Works his major achievement was the creation (in response to the Great Stink of 1858) of a sewer network for central London which was instrumental in relieving the city from cholera epidemics, while beginning to clean the River Thames. He was also the designer of the Hammersmith Bridge.

All content from Kiddle encyclopedia articles (including the article images and facts) can be freely used under Attribution-ShareAlike license, unless stated otherwise. Cite this article:
Joseph Bazalgette Facts for Kids. Kiddle Encyclopedia.