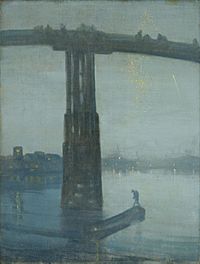 Battersea Bridge is a cast-iron and granite five-span cantilever bridge crossing the River Thames in London, England. It is on a sharp bend in the river, and links Battersea south of the river with Chelsea to the north.

The first Battersea Bridge was a toll bridge. Although a stone bridge was planned, a cheaper wooden bridge was built instead. Designed by Henry Holland, it was opened to pedestrians in November 1771, and to vehicles in 1772. The bridge was poorly designed. Iy was dangerous to its users and to passing shipping. Boats often collided with it. To reduce the dangers to shipping, two piers were removed, and the sections of the bridge above them were strengthened with iron girders.

Although dangerous and unpopular, the bridge was the last surviving wooden bridge across the Thames in London. It was the subject of paintings by Turner, Cotman and Whistler.

In 1879 the bridge was taken into public ownership, and in 1885 demolished and replaced with the existing bridge, designed by Joseph Bazalgette. It is the narrowest surviving road bridge over the Thames in London, and one of London's least busy Thames bridges. The position on a bend in the river makes the bridge a hazard to shipping, and it has been closed many times due to collisions.

In June 2012, the bridge was highlighted on the route of Queen Elizabeth II's Diamond Jubilee Pageant on the Thames. The Battersea Bridge area marked the official start of the parade of ships and boats moving towards Tower Bridge.

All content from Kiddle encyclopedia articles (including the article images and facts) can be freely used under Attribution-ShareAlike license, unless stated otherwise. Cite this article:
Battersea Bridge Facts for Kids. Kiddle Encyclopedia.