Morden is a district in the London Borough of Merton. It is located approximately 8 miles (13 km) South-southwest of central London between Merton Park and Wimbledon (to the north), Mitcham (to the east), Sutton (to the south) and Worcester Park (to the west). Morden had a population of 48,233 in 2011 (which refers to the populations of the wards of Cannon Hill, Lower Morden, Merton Park, Ravensbury and St Helier).

Morden might get its name either from the British language words Mawr (great or large) and Dun (a fort), or possibly "The Town on the Moor".

Human activity in Morden dates back to the Iron age period when Celtic tribes are known to have occupied areas around Wimbledon, but the first significant development in Morden was the construction of the Roman road called Stane Street from Chichester to London.

The route of Stane Street through Morden followed the current A24, London Road up Stonecot Hill from the south west crossing Morden Park to the west of the current dual carriageway road and passing through the pitch and putt golf course and the grounds of St Lawrence's Church. The road then descended the other side of the hill towards the town centre passing west of the Underground station and crossing the north corner of Morden Hall Park heading in the direction of Colliers Wood and Tooting. Small Roman artifacts, mainly coins and pottery, have been found at various locations within the area although there is no evidence of any settlement.

Ethelstan the Etheling, son of Ethelred the Unready, left "land at Mordune" to the abbey of Christ and St. Peter in his will of 1015, which became the site of the first Saxon parish church of St Lawrence.

In 1086, the Domesday Book recorded the manor as Mordone, part of Wallington Hundred. It was held by Westminster Abbey and its assets were: 3 hides; 1 mill worth £2 and 7 ploughs. It rendered £15. in total. Fourteen people were recorded as living in the area.

The manor and village remained abbey property until the Dissolution of the Monasteries in Henry VIII's reign when the manor was sold to Lionel Ducket and Edward Whitchurch. Together, they sold it on the following year to Sir Richard Garth who became Lord of the Manor. The Garth family owned the land and maintained their connection with the parish for the next four centuries, living at Morden Hall Park until the manor was sold by another Sir Richard Garth in 1872.

The prominence of the Garth family is recorded locally in the name of Garth Road, Lower Morden and the former Garth School. The two lions included in the present civic arms of the London Borough of Merton are adopted from the arms of Sir Richard.

Despite the rapid suburban development of nearby Wimbledon occasioned by the arrival of the new railways constructed in the mid 19th century, Morden remained a rural parish throughout the 19th century. While the population of Wimbledon grew hugely from 1,591 in 1801 to 41,652 in 1901, the population of Morden was 512 in 1801 and, one hundred years later, had grown to just 960.

In 1871, the area of the parish of Morden was 1,474.926 acres (5.969 km2) with the small village clustered around St Lawrence’s church at the top of the hill on the road from London to Epsom (now London Road/Epsom Road). Approximately half a mile to the west of the main village and the grounds of Morden Park stood the hamlet of Lower Morden.

Close to the church were the George Inn, a 17th-century coaching inn (now modernised and part of a national pub restaurant chain), the estate of Morden Park and a school.

The other main public house in the village was the Crown Inn, located to the north east of the village with a small cluster of cottages on Crown Road. The rest of what is now the commercial centre of Morden was fields.

In the late 19th century the principal industry remained agriculture, although some industrial activity did exist along the River Wandle where watermills ground tobacco to snuff and a varnish works existed close to the site of Poplar Primary School. By 1898, the varnish works had gone and there was a brickworks on the site of Mostyn Gardens in Martin Way (then called Green Lane).

Under the Local Government Act, 1894, the parish of Morden formed part of the Croydon Rural District of Surrey. The first two decades of the 20th century saw little change in the village, with industry still mainly agricultural in nature; however development in the parish of Merton to the north led to that area being removed from the rural district to form the Merton Urban District in 1907. Morden was merged with the Merton Urban District, in 1913, to form the Merton and Morden Urban District. It was not, until 1926, when Morden Underground station opened as the terminus of a new extension of the City & South London Railway (now part of the London Underground's Northern line), that the fast and direct route to Central London opened up the village for residential development.

To complement the new station, a garage was constructed on the other side of London Road, adjacent to the railway cutting and, in 1932, Morden Cinema was built next to it on the corner of Aberconway Road. Around the station a new commercial centre grew quickly as shops sprang up along London Road and Crown Lane, including a rebuilt and enlarged Crown public house (opened in 1932) and a large Royal Arsenal Co-operative Society (RACS) department store (opened in 1940).

Away from the new commercial centre of Morden, the existing rural roads were widened and rebuilt and the fields were rapidly divided into building plots and laid out for new housing. Further transport improvements came with the construction of a new Southern Railway branch line from Wimbledon to Sutton via stations at South Merton and Morden South (so named to differentiate it from Morden Underground Station and Morden Station (now Morden Road tram stop), although it was actually north east of the original village centre). The new line opened in January 1930. As a result of the new transport links, the population of Morden increased rapidly from 1,355 in 1921 to 12,618 in 1931. In the next fifteen years, the population continued to grow, as most of the parish was covered in new suburban homes.

One of the main residential developments in the 1930s was the St. Helier estate, built by the London County Council (LCC) to house workers from Inner London and named in honour of Lady St. Helier, an alderman of the LCC. The estate was at the time the largest local authority development in South London and has its road names arranged in alphabetical order, from the north-west corner (Abbotsbury Road) to the south-east corner (Woburn Road). Reflecting the previous ownership of the land by Westminster Abbey, all are named after religious establishments.

In 1943, the council was granted a civic coat-of-arms incorporating lions from the Garth family arms and the fret from the arms of Merton Priory. The motto, "In Libertate Vis", means "Our Strength is our Freedom". In 1965, under the London Government Act 1963, the Merton and Morden Urban District Council was abolished and its area combined with that of the Municipal Borough of Wimbledon and the Municipal Borough of Mitcham to form the present-day London Borough of Merton. 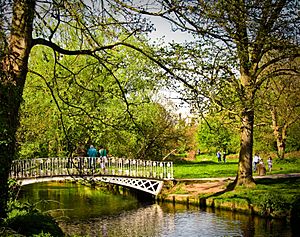 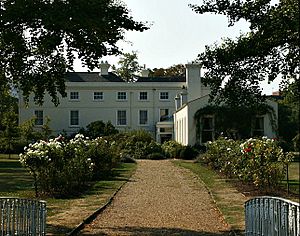 Despite London's suburban expansion, a little of the earlier rural nature of Morden has survived; for instance several grand period buildings remain, especially within Morden's parks. The area retains a good provision of parks and green spaces, many of them created from former country estates. The 125 acre Morden Hall Park is of particular note and is run by the National Trust (see below). Its main entrance is only a quarter-of-a-mile from Morden Underground Station.

The largest building in the town centre is Crown House, sixties-built and 14 storeys tall; designed in 1959 by A. Green ARIBA and built between 1960 and 1962. The concave frontage of the building lends it some distinction, as does the "chessboard" style juxtaposition of its light and dark facade features. It incorporated the Crown public house, on which site part of the building covered. The building is home to Merton Council's Civic Centre and a large adjoining library.

At around the same time, Morden Underground Station, originally a single storey building, with shops, had three-storey office accommodation incorporated above it.

A further office building with a large supermarket (now a Sainsbury's) at ground-floor level was built in the eighties at the other end of the town centre.

The cinema and adjoining garage were demolished and replaced by shops some years ago.

Morden plays host to a number of buildings and parks worthy of note including: 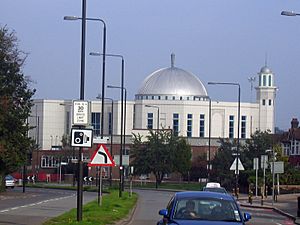 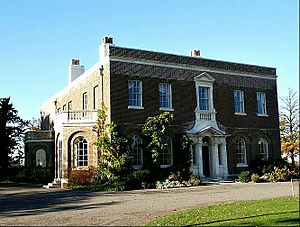 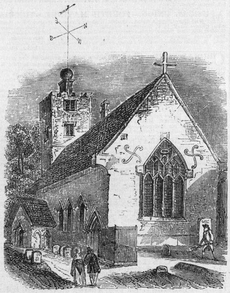 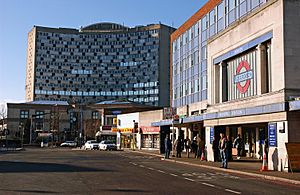 Morden Underground station with Crown House in the background 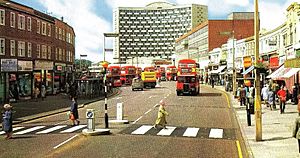 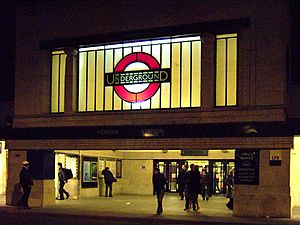 Nearest railway stations and tramlink stops (in order of proximity):

Local day and night Buses and there garages that serve Morden are:

All content from Kiddle encyclopedia articles (including the article images and facts) can be freely used under Attribution-ShareAlike license, unless stated otherwise. Cite this article:
Morden Facts for Kids. Kiddle Encyclopedia.