St Helier is a residential cottage estate in the London boroughs of Merton and Sutton. The portion of the estate north of Green Lane and Bishopsford Road is in Merton, the remainder is in Sutton.

The site of the St. Helier estate has been connected to long-term charity since the early 17th century. Henry Smith (d. 1627) was a wealthy citizen and salter of London who gave much money to parishes in London and Surrey during his lifetime and in his will. He is buried in Wandsworth parish church and is supposed to have been born in Wandsworth. In 1617 he gave £500 towards the purchase of land in Carshalton, the rent of which was to support the poor of Wandsworth. Another £100 bequest came from Mrs. Elizabeth Blackwell. In 1814 the lands were described as being just over 116 acres and having a building, barn and outhouses. The Wandsworth Poor Lands lay on either side of Wrythe Lane at the southernmost part of the St. Helier estate footprint. Another local benefactor was Christopher Muschamp, who died in 1660 and is buried at All Saints, Carshalton. He bequeathed £200 to buy land, the yearly rental of which was to purchase apprenticeships for two poor children who had been born in the parish. Pasture land was bought from Henry Byne in Cannon Sheephouse Lane, which is now known as Green Wrythe Lane. Like the adjoining Sutton Common, most of the area remained semi-rural until the early 20th century.

The estate was built between 1928 and 1936 by the London County Council for the re-housing of people from decaying inner London areas. Landscaping on the large-scale town planning scheme was by landscape architect Edward Prentice Mawson.

Its development was spurred by the opening of Morden Underground station in 1926, and the Wimbledon to Sutton railway line in 1930, with a station at St Helier. These services provided rapid links into central London for the residents. 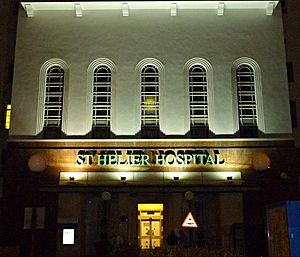 The estate was named in honour of Lady St. Helier, who was an LCC Alderman from 1910 to 1927. It was the second largest (after the Becontree-Dagenham estate) of a series of 'out-county' cottage estates and was based on the Garden City ideas of Ebenezer Howard. The area had previously consisted largely of lavender fields, the last remnants of the famous Mitcham lavender industry.

In remembrance of the area's historic ownership by Westminster Abbey, the roads are named in alphabetical order after Monasteries and Abbeys starting in the north-west with Aberconway Road and ending with Woburn Road in the south-east.

The estate's Bishop Andrewes Church, in Wigmore Road, was designed by the architect Geddes Hyslop in 1933.

Today ownership of housing on the estate is split between private and local authority, with many people taking advantage of the right to buy scheme since the 1970s. The hospital still exerts an imposing presence on the estate, both economically and physically. Most of the buildings are original and many are still being used for their original purposes. There has been a little amount of infilling around the outskirts, and the estate now merges into the suburbs of Sutton, Carshalton and Morden.

All content from Kiddle encyclopedia articles (including the article images and facts) can be freely used under Attribution-ShareAlike license, unless stated otherwise. Cite this article:
St Helier, London Facts for Kids. Kiddle Encyclopedia.