Indie is a word that is short for independent. When people talk about indie in music, they mean music that is made by people independently from major record labels (mainly rock and roll groups and artists). Indie music could also be very experimental, meaning that people try out things like new or different sounds. The styles can range from rock music to house music to pop music.

Examples of what could be described as indie music include indie rock and indie pop.

The group of stereotypical teens who tend to listen to indie music are called indie kids. 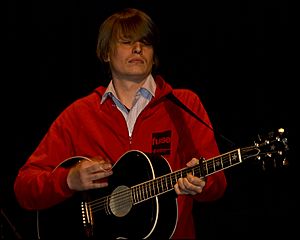 All content from Kiddle encyclopedia articles (including the article images and facts) can be freely used under Attribution-ShareAlike license, unless stated otherwise. Cite this article:
Indie (music) Facts for Kids. Kiddle Encyclopedia.