Mitski Miyawaki (born Mitsuki Laycock; September 27, 1990), known mononymously as Mitski, is a Japanese-American singer-songwriter. Mitski self-released her first two albums, Lush (2012), and Retired from Sad, New Career in Business (2013), while studying at Purchase College's Conservatory of Music. After graduating, she released her third studio album, Bury Me at Makeout Creek (2014), through Double Double Whammy. It was followed by Puberty 2 (2016) and Be the Cowboy (2018), released on Dead Oceans.

Mitski Miyawaki was born Mitsuki Laycock on September 27, 1990 in Japan to an American father and a Japanese mother. While growing up she moved frequently due to her father's job at the United States Department of State, living in many countries, including Turkey, China, Malaysia, Japan, the Czech Republic, and the Democratic Republic of the Congo, before eventually settling in the United States. She was eighteen when she wrote her first song.

After enrolling at Hunter College to study film, Mitski decided to pursue music instead and transferred to Purchase College's Conservatory of Music, where she studied studio compositions. During her time at Purchase College, she recorded and self-released her piano-based first and second albums, Lush (2012) and Retired from Sad, New Career in Business (2013), as student projects.

After graduating, she served as the vocalist for the short-lived prog-metal band Voice Coils and began work on her third studio album, Bury Me at Makeout Creek, which was released on November 11, 2014, through Double Double Whammy. The album represented a sonic departure from Mitski's orchestral and classical piano background found in her first two albums, exchanging it for raw, impulsive guitar. It garnered acclaim from numerous publications.

On December 22, 2015, Mitski signed with Dead Oceans before releasing new music the following year. She announced her fourth studio album, Puberty 2, on March 1, 2016, and shared the lead single, "Your Best American Girl". She released another single, "Happy", before the release of the album on June 17. The album was recorded over a two-week period at Acme Studios in Westchester County, New York and was produced by longtime collaborator Patrick Hyland. The album received widespread acclaim from music critics. "Your Best American Girl" was named 13th best song of 2010s by Rolling Stone.

In a 2016 episode of the Cartoon Network show Adventure Time, her song "Francis Forever" was covered by Olivia Olson as the character Marceline the Vampire Queen.

On February 21, 2017, the Pixies announced US tour dates with Mitski as a supporting act. On May 1, a compilation album consisting of 100 songs by different artists titled Our First 100 Days was released. It includes Mitski's cover of One Direction's song "Fireproof". The compilation aims to raise funds for organizations that support causes threatened by Donald Trump's proposed policies. Mitski played a cover of the song in 2015, but that version has since been taken down. Mitski also covered Frank Sinatra's 1951 classic "I'm a Fool to Want You" for the 7-Inches For Planned Parenthood compilation album. On October 4, 2017 Lorde announced Mitski will be an opening act for selected dates as part of her Melodrama World Tour. On November 1, a short film starring Mitski called Sitting was released. 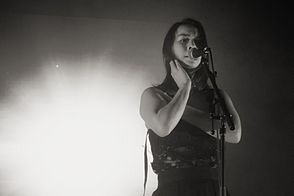 Mitski performing at a concert in Seattle in October 2018.

On April 20, 2018, Mitski teamed up with the experimental band Xiu Xiu on the song "Between the Breaths" for the soundtrack of the sci-fi comedy film How to Talk to Girls at Parties, based on the short story of the same name.

On tour in 2019, Mitski began incorporating choreography into her live performances inspired by Butoh, a form of dance theater developed in post-war Japan, in which "performers draw on chaotic internal emotions but depict them with precise, repetitive gestures." The approach reflected her wish to "give audiences something new" on her second headlining tour since Be the Cowboy's release, as well as a desire "to develop her own, idiosyncratic ways of maintaining a grip on an audience," since she'd learned "that the jumping around onstage, getting everyone pumped up, doesn’t come naturally to me." Mitski worked with performance artist Monica Mirabile to devise the tour's "highly stylized, sometimes unsettling" movements.

Mitski shared her new song, "Cop Car", in January 2020, a never-released piece from the soundtrack of The Turning. She was featured in the song "Susie Save Your Love" from Allie X's album, Cape God, released in February 2020.

On October 29, 2020, it was announced that Mitski will provide the soundtrack to the graphic novel This Is Where We Fall. The sci-fi western story written by Chris Miskiewicz and Vincent Kings "unpacks themes of theology, death, and the after-life". Of the project, Mitski said "It was exciting to make a soundtrack for a comic book, It allowed me to work outside of my usual songwriting form and try to approach it like a score, but without any of the cues that come with working alongside a moving image, which ended up being both freeing and challenging. I hope the end result helps to immerse you in the story!" A country song called "The Baddy Man" was released as the first preview from the soundtrack on March 5, 2021. Z2 Comics will release the album on cassette with the standard hardcover novel on May 5, 2021. A limited edition deluxe vinyl will also be released. At the moment, Z2 has no plans to put the soundtrack on streaming services.

Mitski reflects her cross-cultural identity as "half Japanese, half American but not fully either", a feeling that is often reflected in her music, which occasionally discusses issues of belonging. In a 2016 interview with The New York Times, Mitski expressed the tension of being a private person and her discomfort with the attention that comes with being in the public eye, therefore preferring to keep her personal life private.

All content from Kiddle encyclopedia articles (including the article images and facts) can be freely used under Attribution-ShareAlike license, unless stated otherwise. Cite this article:
Mitski Facts for Kids. Kiddle Encyclopedia.