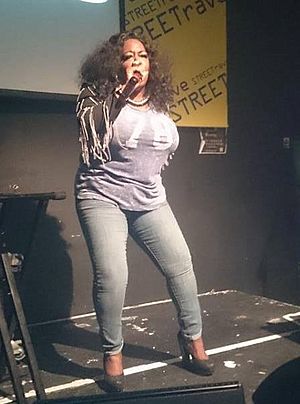 Kym Mazelle (born 1960) has been called the "The First Lady of House Music."

House music is a type of electronic dance music. It began during the early 1980s from disco and the black American soul music tradition. It takes its name from the Warehouse, a Chicago club where DJs first played their records to a large audience. The original "House" sound is characterized by "four on the floor" beats at 120-130 BPM, forward-driven bass lines, an emphasis on the second and fourth beats of each measure, handclaps, and cymbals. Over the years, house has created many types of house music. These include:

All content from Kiddle encyclopedia articles (including the article images and facts) can be freely used under Attribution-ShareAlike license, unless stated otherwise. Cite this article:
House music Facts for Kids. Kiddle Encyclopedia.