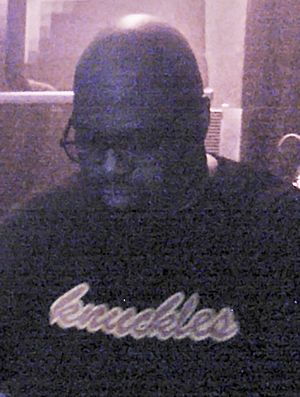 Francis Warren Nicholls, Jr. (January 18, 1955 – March 31, 2014), better known by his stage name Frankie Knuckles, was an American DJ, record producer, and remixer. He played a major role in house music in Chicago, Illinois during the 1980s when it was made. In 2005, he was added to the Dance Music Hall of Fame for his achievements. He was born in the Bronx borough of New York City. He was gay.

Knuckles died from complications of diabetes on March 31, 2014 in Chicago. He was 59 years old.

All content from Kiddle encyclopedia articles (including the article images and facts) can be freely used under Attribution-ShareAlike license, unless stated otherwise. Cite this article:
Frankie Knuckles Facts for Kids. Kiddle Encyclopedia.