The Woolwich Ferry is a free vehicle ferry service across the River Thames in East London, connecting Woolwich to the south with North Woolwich to the north. It is licensed and financed by London River Services, the maritime arm of Transport for London (TfL). The service is operated by Briggs Marine under licence from TfL and carries both foot passengers and vehicles. Around two million passengers use the ferry each year.

There has been a ferry operating in Woolwich since the 14th century, and commercial crossings operated intermittently until the mid-19th century. The free service opened in 1889, following the abolition of tolls across bridges to the west of London. Traffic increased in the 20th century owing to the rise in motor vehicle use, and because of the lack of nearby fixed crossings of the Thames it has remained popular, although pedestrian use has dropped as a result of the construction of a parallel foot tunnel and the extension of the Docklands Light Railway through to Woolwich Arsenal station. Alternatives such as the Thames Gateway Bridge and the Gallions Reach Crossing have been proposed as replacements, but there are no immediate plans to discontinue the Woolwich Ferry as long as there is a demand. 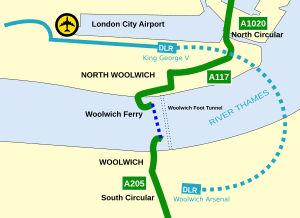 The Woolwich Ferry route, connecting the North Circular and South Circular Roads. The Woolwich foot tunnel runs alongside the ferry and the Docklands Light Railway parallels the route from King George V to Woolwich Arsenal.

On weekdays, the ferry operates from 6.10 am until 8 pm with a two-boat service (10 minutes nominal interval between sailings); on Saturdays, from 6.10 am to 8 pm with a one-boat service (15 minutes nominal interval; the last south-to-north sailing is 15 minutes earlier at 7.45 pm); on Sundays, from 11.30 am to 7.30 pm with a one-boat service (last south-to-north sailing at 7.15 pm). The ferries can carry heavy goods vehicles and other road traffic across the river, up to a maximum height of 4.7 metres (15 ft) and width of 3.5 metres (11 ft). The service is free for all traffic; in 2012 Transport for London (TfL) estimated a subsidy cost of 76.5p per passenger.

The nearest alternative crossing for pedestrians is the Woolwich foot tunnel that runs parallel to the ferry. A Docklands Light Railway (DLR) station, Woolwich Arsenal on the south side of the Thames, was opened in January 2009 as the new terminus of the London City Airport branch. King George V DLR station, on the opposite side of the river, is close to the north ferry dock.

There has been a connection between what is now Woolwich and North Woolwich across the Thames since the Norman Conquest. The area was mentioned in Domesday Book as 63 acres (25 ha) belonging to Hamon, the dapifer (steward), "which belong to (pertinent in) Woolwich"; the "pertinent" here refers to the portion of land north of the Thames yet also part of the county of Kent. State papers in 1308 show that a service was running between North Woolwich and Warren Lane. That year, William de Wicton sold the business to William atte Halle for £10. The ferry was subsequently sold in 1320 for 100 silver marks.

Cross-river traffic increased following the establishment of the Royal Arsenal in 1671. To enable movement of troops and supplies, the army established its own ferry in 1810. The following year an Act of Parliament established a commercial ferry company, but it was dissolved in 1844. In 1846 the Eastern Counties and Thames Junction Railway extended its lines to include a Thames wharf branch; eventually three steam ferries operated, but they proved inadequate to meet the growing demand. In October 1880 a public meeting was held in Woolwich to discuss setting up a locally run steam-ferry service, but the cost was seen as prohibitive.

Following the establishment of the Metropolitan Board of Works, which had taken over toll bridges in west London and opened them to free public use, it was suggested that the Board should fund a free crossing of the Thames in east London. Proposals were made to provide services at Woolwich and further upstream at Greenwich, but the latter plan was abandoned. In 1884 the Board agreed to provide two steam-powered ferries, each costing £10,650, and asked chief engineer Sir Joseph Bazalgette to lead design and construction. In September 1887 Messrs Mowlem and company were awarded contracts valued at £54,900 to build approaches, bridges and pontoons.

The service was officially opened on 23 March 1889, with the paddle steamer Gordon. Two days before the first service, the Metropolitan Board of Works was replaced by the London County Council (LCC), and the opening ceremony was conducted by Lord Rosebery instead of the expected Bazalgette. The sister vessel, Duncan was introduced on 20 April.

By the end of the 1920s the rise in motor traffic had put pressure on the ferry's capacity. A proposed bridge between Shooter's Hill and East Ham was rejected as it would be too obvious a target for wartime bombings, and a third vessel was introduced instead. Because of the lack of a fixed crossing, the Thames became a psychological barrier for those living in the East End of London, who could only use a limited number of routes to cross the river, including the Woolwich Ferry. The lack of a suitable alternative route was instrumental in creating plans for what eventually became the Dartford Crossing further downstream. 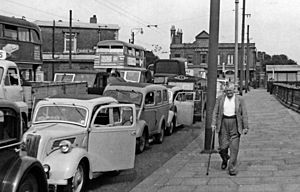 Traffic queueing for the Woolwich Ferry in 1955. The conversion to a Roll On Roll Off vehicle service in 1963 reduced waiting times.

By the 1950s it was still quicker for ferry traffic to divert via the Blackwall Tunnel even with all three vessels operating at full capacity. In April 1963 the ferry service was upgraded to a Roll On Roll Off model, reducing waiting times on the approach roads. The LCC continued to operate the ferry until it was replaced by the Greater London Council (GLC) on 31 March 1965. In 1964 Marples Ridgeway and Partners started building the current reinforced concrete terminals, which can operate over a 30 feet (9.1 m) tidal range. The three ferries in use today were built in 1963 and the current terminals were opened in 1966.

After the abolition of the GLC in 1986 the responsibility for operating the service was transferred to the Secretary of State for Transport, who contracted the then London Borough of Greenwich to run the service. Asset ownership and operating rights were subsequently transferred to Transport for London (TfL) on the establishment of the Greater London Authority, but the London Borough of Greenwich continued to operate the ferry on behalf of TfL.

In March 2008 the London Borough of Greenwich gave TfL notice that it would cease operating the service from 30 September 2008. On 12 September TfL announced that the outsourcing group Serco would take over the operation of the service from 1 October 2008; the contract ran initially until 31 March 2010. In December 2012 control of the crossing passed from Serco to Briggs Marine, who were expanding into public passenger services. The company was awarded a £50 million 7-year contract, which began in April 2013.

On 3 August 2011 a 19-year-old ferry worker died after falling off the boat into the river Thames. The MAIB report published in August 2012 blamed "unseamanlike working practices" during the unmooring operation for the death. 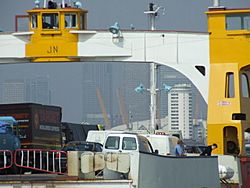 Traffic boarding the James Newman. The ferry service is important for HGVs owing to restrictions in the Blackwall Tunnel and northbound Dartford Crossing.

The first ferries were the side-loading paddle steamers Gordon, Duncan and Hutton, named after General Gordon of Khartoum, Colonel Francis Duncan MP and Professor Charles Hutton. Each was powered by a condensing engine manufactured by John Peen & Son of Greenwich producing 100 nominal horsepower.

The initial fleet was eventually replaced, starting in 1923 with The Squire (named after William Squires, a former mayor of Woolwich), and in 1930 with the Will Crooks (Labour MP for Woolwich, 1903–21) and the John Benn (Sir John was a member of London County Council, Liberal MP for Wapping, and grandfather of Tony Benn).

The current three vessels were built in Dundee in 1963 by the Caledon Shipbuilding & Engineering Company to replace the paddle steamers, and were each named after prominent local politicians: John Burns, Ernest Bevin and James Newman (Newman was mayor of Woolwich, 1923–25). These ferries feature Voith-Schneider propulsion systems for manoeuvrability. A cycloidal propeller is fitted centrally at either end, and each is driven by a 500bhp 7-cylinder Mirrlees National diesel engine. In 2014 Transport for London introduced an Art On The River scheme, showing decorative artwork on the ferry vessels. 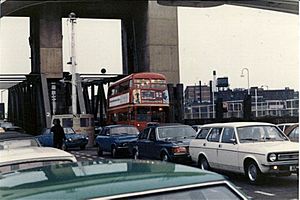 An RT-class bus, in its last year of service with London Transport, embarking the Woolwich Ferry in 1979

The ferry typically attracts about two million passengers a year; occupants of vehicles (including drivers) are counted as passengers. Ferry patronage is still high for vehicles, but has fallen away to minimal numbers for foot passengers. In 2012 the ferry carried around 20,000 vehicles and 50,000 passengers weekly.

At all times of day, but particularly at peak hours, it is common for vehicles to have to queue beyond the next ferry departure. Several rearrangements and improvements have been made to the vehicle queueing arrangements over the years, especially to avoid impact on other local traffic.

For foot passengers, bus services converge on both terminals. There is a small bus station on the north side, but some cross-river foot passengers take the foot tunnel instead. About 300 foot passengers used the ferry daily between 1983 and 1985. Further competition arrived in 2009 with the extension to Woolwich of the Docklands Light Railway, which crosses under the river to the east of the crossing and the tunnel.

The ferry service provides one of the few available crossings of the River Thames east of London. Although there are seventeen river crossings in the 20 miles (32 km) west of Tower Bridge, there are only three the same distance east. As long as there is a demand for a vehicle ferry it is unlikely to be discontinued, and it would require changing an 1885 Act of Parliament to do so.

In 2004 planning applications were submitted for a new bridge, the Thames Gateway Bridge, close to the location of the Woolwich Ferry. However the project was cancelled in 2008. In 2012, the Mayor of London, Boris Johnson, announced the Gallions Reach Crossing, a replacement ferry service running further east from Beckton to Thamesmead expected to open in 2017. The option of a bridge is still popular, with an alternative option of a tunnel in the area. TfL planning director Richard de Cani has said that the ferry will continue to operate as long as there are no alternatives, and there are no current plans to discontinue the service.

Tolls cannot be levied on the ferry without changing the 1885 Act of Parliament. However, it is possible that the service may eventually be tolled in conjunction with other projects such as the Gallions Reach Crossing, which is likely to be tolled itself.

The Woolwich ferry has made several appearances on TV and film. The John Benn is seen being destroyed by the titular monster in the film Behemoth, the Sea Monster. A detailed scale model is used to interact with a model of the monster's head, which capsizes the ship in the Thames. In "Strained Relations", a 1985 episode of the TV series Only Fools and Horses, the character Uncle Albert asks Rodney, played by Nicholas Lyndhurst, if he had ever been on board a ship to which he replied "Yes" but then added it was "only the Woolwich Ferry".

All content from Kiddle encyclopedia articles (including the article images and facts) can be freely used under Attribution-ShareAlike license, unless stated otherwise. Cite this article:
Woolwich Ferry Facts for Kids. Kiddle Encyclopedia.