After an education at Eton and Oxford, Dalmeny succeeded to his grandfather's Scottish earldom in 1868.

Becoming involved in politics, he became a Liberal, and was involved in Gladstone's Midlothian campaign, which brought the Liberals back into power in 1880. In the Liberal administration that followed, Rosebery served in junior offices, including that of Under-Secretary of State for the Home Department, before entering the Cabinet as Lord Privy Seal in March 1885.

Rosebery became a leader of the Liberal Imperialist faction of the Liberal Party, and in Gladstone's third (1886) and fourth (1892–1894) administrations, Rosebery served as Foreign Secretary. When Gladstone retired in 1894, Rosebery became his successor as Prime Minister, much to the disgust of the more left-wing Liberals. Rosebery's government was largely unsuccessful—his designs in foreign policy, such as expansion of the fleet, were defeated by disagreements within the Liberal Party, while the Tory-dominated House of Lords stopped the whole of the Liberals' domestic legislation. In 1895, Rosebery resigned, and a Conservative government under Lord Salisbury took his place.

Rosebery resigned as leader of the Liberal Party in 1896, and gradually moved further and further from the mainstream of the party, supporting the Boer War and opposing Irish Home Rule, a position which prevented him from taking part in the Liberal government that returned to power in 1905. In his later years, Rosebery turned to writing, including biographies of Lord Chatham, Pitt the Younger, Napoleon, and Lord Randolph Churchill. He was also famous for his champion racehorses.

Roseberry was extremely wealthy, even by the standards of the aristocracy before the First World War. He owned 12 houses, all of them grand, and some of huge size. 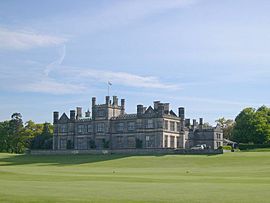 Dalmeny House was the ancestral seat of the Earls of Rosebery and the setting for Lord and Lady Rosebery's political houseparties. 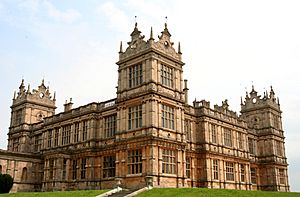 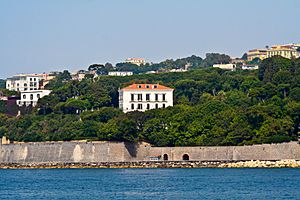 By marriage, he acquired:

With his fortune, he bought:

As Earl of Rosebery, he was laird of:

It was rumoured that Rosebery was homosexual or bisexual. Like Oscar Wilde, he was hounded by Queensbury for his association with one of Queensberry's sons. It was Francis Douglas, who was Roseberry's private secretary. The suggestion was that Queensberry had threatened to expose the Prime Minister if his government did not vigorously prosecute Wilde for Wilde's relationship with Francis Douglas's younger brother, Lord Alfred Douglas. Queensberry believed, as he put it in a letter, that "Snob Queers like Rosebery" had corrupted his sons, and he held Rosebery indirectly responsible for Drumlanrig's death.

All content from Kiddle encyclopedia articles (including the article images and facts) can be freely used under Attribution-ShareAlike license, unless stated otherwise. Cite this article:
Archibald Primrose, 5th Earl of Rosebery Facts for Kids. Kiddle Encyclopedia.