Order of the Thistle facts for kids 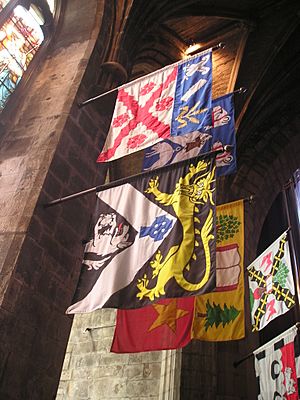 Banners of Knights of the Thistle, hanging in St Giles High Kirk

The Most Ancient and Most Noble Order of the Thistle is an order of chivalry, associated with Scotland. Its original date of founding is unknown. James VII (also King of England as James II) created the modern Order in 1687. The Order is the Sovereign and sixteen Knights and Ladies, as well as certain "extra" knights (members of the British and foreign royal families). The Sovereign decides who is to be a member. He or she is not advised by the Government, as occurs with most other Orders. The sixteen members are required to be Scottish-born, but the "extra" knights and ladies are not.

The Order's main emblems are the thistle, the national flower of Scotland, and Saint Andrew holding a saltire (X shaped cross). The motto is Nemo me impune lacessit (Latin for "No one provokes me with impunity"); the same motto is also on the Royal Coat of Arms of the United Kingdom for use in Scotland and on some pound coins. St Andrew is also the patron saint of the Order.

Most British orders of chivalry cover all of the United Kingdom, but the three most most senior ones each cover only one constituent country . The Order of the Thistle, which covers to Scotland, is the second-most senior in precedence. Its equivalent in England, The Most Noble Order of the Garter, is the oldest order of chivalry in the United Kingdom, dating to the middle fourteenth century. In 1783 an Irish order, The Most Illustrious Order of St Patrick, was founded; but since the independence of the Republic of Ireland the Order has fallen dormant. The last new knight was made in 1927, and the last surviving Knight of St Patrick died in 1974. 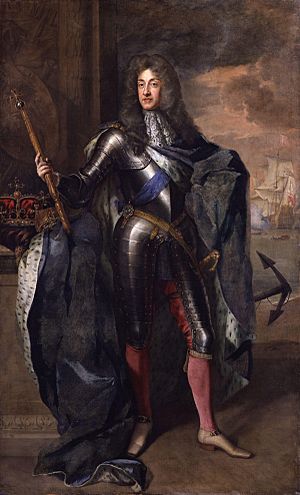 The first date of the Order's creation is not known. One story says that Achaius, King of Scots, was fighting King Aethelstan of East Anglia and he saw cross of St Andrew in the sky. After he won the battle, Achaius established the Order of the Thistle. Even though Achaius and Aethelstan never fought, this story of the foundation, is given in the Royal Warrant 'reviving' the Order in 1687. Another story says that the Order was instituted, or re-instituted by Robert I at the Battle of Bannockburn.

King James II and VII issued letters patent "reviving and restoring the Order of the Thistle to its full glory, lustre and magnificency" in 1687. Only 12 knights were allowed, and he appointed eight before the King was deposed in 1688. His successors, the William and Mary, did not make any more appointments to the Order. In 1703 however, Anne once again revived the Order of the Thistle. 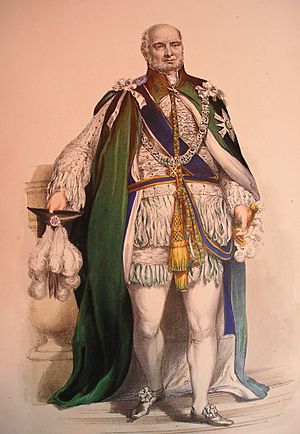 Prince Augustus Frederick, Duke of Sussex in the robes of a Knight of the Order of the Thistle

The Kings of Scotland–later the Kings of Great Britain and of the United Kingdom–have served as Sovereigns of the Order.

When James VII revived the Order, the statutes said that the Order would continue the ancient number of Knights, which was described in the preceding warrant as "the Sovereign and twelve Knights-Brethren in allusion to the Blessed Saviour and his Twelve Apostles.

The Sovereign has historically had the power to choose Knights of the Order. From the eighteenth century onwards, the Sovereign made his or her choices upon the advice of the Government. George VI felt that the Orders of the Garter and the Thistle had been used only for political patronage, rather than to reward actual merit. Therefore in 1946, with the agreement of the Prime Minister (Clement Attlee) and the Leader of the Opposition (Winston Churchill), both Orders returned to the personal gift of the Sovereign.

Knights and Ladies of the Thistle may also be admitted to the Order of the Garter.

Knights and Ladies of the Thistle may also have their knighthoods taken away. But this has happened only once, to John Erskine, 6th Earl of Mar who was deprived of both the knighthood and the earldom after taking part in the Jacobite rising of 1715.

The Order has five officers: 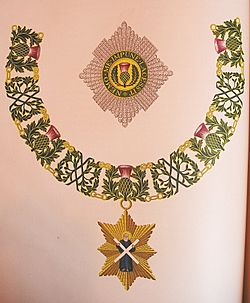 Ribbon of the Order

For the Order's great occasions, such as its annual service each June or July, as well for coronations, the Knights and Ladies wear an elaborate costume:

Aside from these special occasions, however, much simpler badges are used whenever a member of the Order attends an event at which decorations are worn. 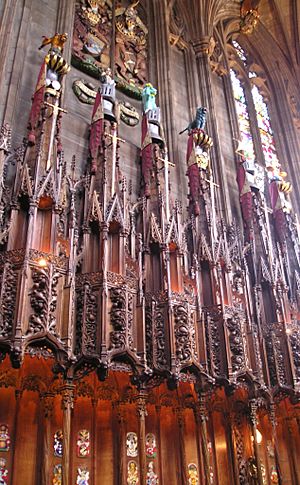 Swords, helms and crests of Knights of the Thistle above their stalls in the Thistle Chapel. Lady Marion Fraser's helm and crest are second from the left 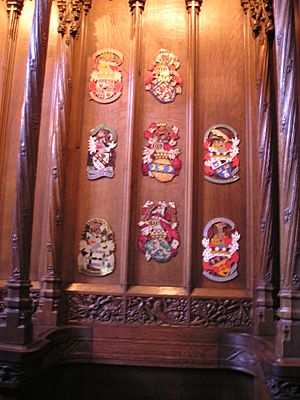 Stall plates of Knights of the Thistle

When James VII revived the Order in 1687, he wanted the Abbey Church at the Palace of Holyroodhouse to be the Chapel for the Order of the Thistle, perhaps copying the idea from the Order of the Garter (whose chapel is located in Windsor Castle).

James VII was deposed by 1688 and the Order did not have a Chapel until 1911, when one was added onto St Giles High Kirk in Edinburgh. Each year, the Sovereign stays at the Palace of Holyroodhouse in June or July; during the visit, a service for the Order is held. Any new Knights or Ladies are installed at annual services.

Each member of the Order, including the Sovereign, is allotted a seat in the Chapel. Their coat of arms is above their seat.

All content from Kiddle encyclopedia articles (including the article images and facts) can be freely used under Attribution-ShareAlike license, unless stated otherwise. Cite this article:
Order of the Thistle Facts for Kids. Kiddle Encyclopedia.