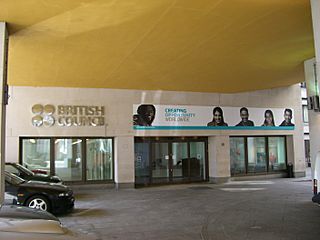 The British Council is an organization in the United Kingdom which specializes in international educational and cultural opportunities. Its main activities are 'Learning/Teaching, the Arts, Science and Society'. Its headquarters is in Spring Gardens near Whitehall in Central London. There are other branch offices in Belfast, Cardiff, Manchester and Edinburgh. Its overseas network covers 233 locations in over 100 countries. The British Council is registered as a charity, both in England and Wales, and in Scotland. It receives grants from the British government. The rest is earned from teaching English to individuals and organizations, conducting examinations, and providing consultancy.

The British Council was founded in 1934 as the British Committee for Relations with Other Countries. The idea came from Sir Reginald (Rex) Leeper who recognizes the importance of "cultural propaganda" in promoting British interests. He was encouraged by the success of the official cultural organizations of France, Germany and Italy. The British Council's 'sponsoring department' is the Foreign and Commonwealth Office of the British government, although it runs its day-to-day activities independently. In September 2009, its Director of Arts, Rebecca Walton, said: "We want people to become more inclined towards the UK and more sensitive to the positive benefits of the UK in the world".

All content from Kiddle encyclopedia articles (including the article images and facts) can be freely used under Attribution-ShareAlike license, unless stated otherwise. Cite this article:
British Council Facts for Kids. Kiddle Encyclopedia.