Order of the Bath facts for kids

Military Badge of the Order of the Bath 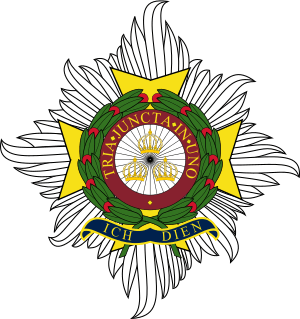 A drawing of a military star, as awarded to Knights or Dames Grand Cross

The Most Honourable Order of the Bath is a British order of chivalry. It was founded by George I, on 18 May 1725. The name comes from an old ceremony, first mentioned in 1128. In the ceremony, men participated in a vigil of fasting, prayer, and taking a bath. They did this on the day before they were made a knight. The ceremony was abolished in 1815.

The Order is made up of the Sovereign (the British Sovereign), the Great Master (Charles, Prince of Wales), and three classes of members: (Highest to lowest)

Originally founded as a military order of chivalry, the star (or pip) is worn as army officers' rank insignia. The insignia is that of the Order of the Bath. Members of the order now belong to either the Civil or the Military Division. The Order's motto is Tria juncta in uno (Latin for "Three joined in one"). This is a reference to either the union of England, Scotland and Ireland, or to the Holy Trinity. A symbol of the Order that is seen over and over has three crowns in it. Another motto, Ich dien (German for "I serve") is used occasionally, but only by members of the Order who serve in the military.

All content from Kiddle encyclopedia articles (including the article images and facts) can be freely used under Attribution-ShareAlike license, unless stated otherwise. Cite this article:
Order of the Bath Facts for Kids. Kiddle Encyclopedia.