Sir Robert Walpole, 1st Earl of Orford was a British politician. He is regarded by many as the first de facto Prime Minister of the United Kingdom (then called Great Britain). The position of prime minister was not actually official at that time.

Walpole He was born in Houghton, Norfolk on 26 August 1676. He died on 18 March 1745. Historians think he became England's first Prime Minister in 1721. He was then Prime Minister for a longer time than anyone who came after him. This long time is sometimes called "the robinocracy" (Robin is a common version of Robert). 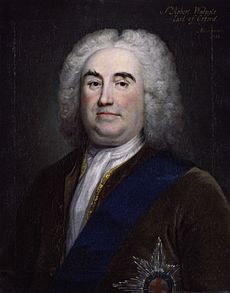 Although the exact dates of Walpole's dominance are not entirely clear, the period 1721–1742 is often used. He dominated the Walpole–Townshend ministry, as well as the subsequent Walpole ministry, and holds the record as the longest-serving British prime minister in history.

W.A. Speck wrote that Walpole's uninterrupted run of 20 years as Prime Minister "is rightly regarded as one of the major feats of British political history... Explanations are usually offered in terms of his expert handling of the political system after 1720, [and] his unique blending of the surviving powers of the crown with the increasing influence of the Commons".

All content from Kiddle encyclopedia articles (including the article images and facts) can be freely used under Attribution-ShareAlike license, unless stated otherwise. Cite this article:
Robert Walpole Facts for Kids. Kiddle Encyclopedia.