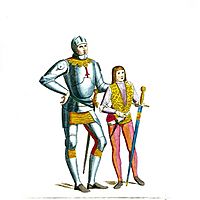 A knight and his squire.

A squire was the shield bearer or armour bearer of a knight, and at times was a knight's servant.

Use of the term has changed over time. In the Middle Ages, a squire was the apprentice of a knight. Later it meant a leader in an English village or Lord of the manor might be called a squire. Later still it was used for key public figures such as Justice of the Peace or Member of Parliament. In modern American usage a squire is the title given to a Justice of the Peace or similar local official. Squire is a shortened version of the word Esquire.

All content from Kiddle encyclopedia articles (including the article images and facts) can be freely used under Attribution-ShareAlike license, unless stated otherwise. Cite this article:
Squire Facts for Kids. Kiddle Encyclopedia.