Colossus of Rhodes facts for kids 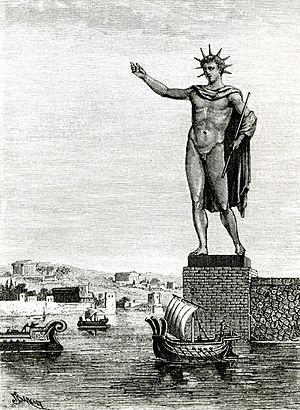 The Colossus of Rhodes, as depicted in an artist's impression of 1880

The Colossus of Rhodes was a statue of the Greek titan-god of the sun Helios, erected in the city of Rhodes, on the Greek island of the same name, by Chares of Lindos in 280 BC.

One of the Seven Wonders of the Ancient World, it was constructed to celebrate Rhodes' victory over the ruler of Cyprus, Antigonus I Monophthalmus, whose son unsuccessfully besieged Rhodes in 305 BC.

According to most contemporary descriptions, the Colossus stood approximately 70 cubits, or 33 metres (108 feet)* high—the approximate height of the modern Statue of Liberty from feet to crown — making it the tallest statue of the ancient world. It was destroyed during the earthquake of 226 BC, and never rebuilt.

As of 2015, there are tentative plans to build a new Colossus at Rhodes Barbour, although the actual location of the original remains in dispute. 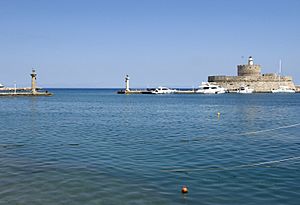 Construction began in 292 BC. Ancient accounts, which differ to some degree, describe the structure as being built with iron tie bars to which brass plates were fixed to form the skin. The interior of the structure, which stood on a 15-metre (49-foot)* high white marble pedestal near the Mandraki harbor entrance, was then filled with stone blocks as construction progressed.

Other sources place the Colossus on a breakwater in the harbor. According to most contemporary descriptions, the statue itself was about 70 cubits, or 33 metres (108 feet)* tall. Much of the iron and bronze was reforged from the various weapons Demetrius's army left behind, and the abandoned second siege tower may have been used for scaffolding around the lower levels during construction.

Upper portions were built with the use of a large earthen ramp. During the building, workers would pile mounds of earth on the sides of the colossus. Upon completion all of the earth was removed and the colossus was left to stand alone. After twelve years, in 280 BC, the statue was completed.

The statue stood for 54 years until Rhodes was hit by the 226 BC earthquake, when significant damage was also done to large portions of the city, including the harbour and commercial buildings, which were destroyed. The statue snapped at the knees and fell over onto the land. Ptolemy III offered to pay for the reconstruction of the statue, but the oracle of Delphi made the Rhodians afraid that they had offended Helios, and they declined to rebuild it.

The remains lay on the ground as described by Strabo (xiv.2.5) for over 800 years, and even broken, they were so impressive that many travelled to see them. Pliny the Elder remarked that few people could wrap their arms around the fallen thumb and that each of its fingers was larger than most statues.

In December 2015, a group of European architects announced plans to build a modern Colossus bestriding two piers at the harbour entrance, despite a preponderance of evidence and scholarly opinion that the original monument could not have stood there. The new statue, 150 metres tall (five times the height of the original) would cost an estimated $283 million, funded by private donations and crowdsourcing. The statue would include a cultural centre, a library, an exhibition hall, and a lighthouse, all powered by solar panels.

All content from Kiddle encyclopedia articles (including the article images and facts) can be freely used under Attribution-ShareAlike license, unless stated otherwise. Cite this article:
Colossus of Rhodes Facts for Kids. Kiddle Encyclopedia.