Kids Encyclopedia Facts
This page is about the town. For the census-designated place, see Walpole (CDP), Massachusetts.

Walpole is a town in Norfolk County, Massachusetts, United States and also encompasses the entirely distinct entity of Walpole (CDP), with its much smaller area of 2.9 square miles and smaller population of 5198 at the 2010 census. Walpole Town, as the Census refers to the actual town, is located about 13 miles (21 km) south of Downtown Boston and 23.5 miles (37.8 km) north of Providence, Rhode Island. The population was 24,070 at the 2010 census. Walpole was first settled in 1659 and was considered a part of Dedham until officially incorporated in 1724. The town was named after Sir Robert Walpole, de facto first Prime Minister of Great Britain. 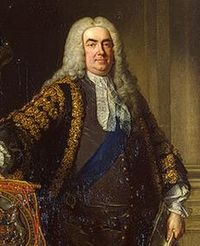 It started out as a territory that was claimed by the Neponset Native American tribe. The Neponset tribe officially claimed the area that is now Walpole, and some of its surrounding territory in 1635. The town of Dedham was not included in this claim, so they began to negotiate with the Neponset tribe to gain land. In 1636, a deal was made between the town of Dedham and the Neponsets to grant Dedham lands that now comprise the towns of Walpole, Norwood, Westwood, Medfield, Norfolk and Dover as well as Dedham. The land given to Dedham in this deal currently includes parts of 16 different towns.

After the territory was bought from Dedham, the saw mill industry began to rise in the area. The first saw mill in Walpole was built near what is now School Meadow Brook and the Neponset river. It was located in the area that is now the Walpole Town Forest. The mill was built and later owned by Joshua Fisher and Major Eleazer Lusher, two wealthy men of Dedham.

Walpole soon wanted to sever its ties with Dedham, so its residents began to petition at Dedham town meetings to become a completely separate town. The request was granted by the town of Dedham in 1724, and the town was officially named Walpole, after Sir Robert Walpole.

After its incorporation, Walpole had a role in the events leading up to the American Revolutionary War. The citizens agreed that the taxes imposed by the British government were unfair. They sent a representative, Joshua Clapp, to the state meetings at Faneuil Hall in Boston. These meetings were to discuss how Massachusetts was going to keep its residents safe and peaceful during the events of the American Revolutionary War. In 1775, Walpole sent 157 men to the Battle of Lexington and Concord. These men were led by Captain Seth Bullard. In December 1777, a British fleet of ships came into Narragansett Bay and anchored in Newport Harbor in Rhode Island. Walpole sent two groups of minutemen, consisting of 65 men in total, to help with the situation. These men were led by Joshua Clapp, and Oliver Clapp. They stayed in Rhode Island to defend the port for three weeks.

Walpole began to grow after the Revolutionary War. By 1860, the town had 1,935 residents. Starting around this time, several mills began to be built, largely on the Neponset River in order to harness the power of falls. Over the years, these mills grew and mainly manufactured products such as cotton, lumber, and paper in its many mills. The most notable of these was the Bird Company, which comprised a large complex on the river in East Walpole. After the company ceased operations at the site in 1980, most of the buildings were razed over the years; a housing development now occupies a large portion of the old mill site and only a few remnants of the area's former use are still evident. The Neponset River was also used for transport between the close towns of Sharon, Foxborough and Medfield. It was also used as a water supply and for water power. The Norfolk County railroad also connected the town. It was also part of a railroad network that connected Walpole to Boston and New York City. Many churches were formed in Walpole at this time, including Trinitarian, Unitarian and Methodist ones. 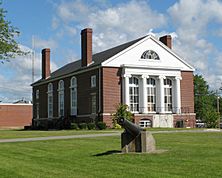 Walpole's first public library was founded in 1872. It was founded by Walpole resident Miss Mary R. Bird. The first library in Walpole was actually founded in 1816 by a group known as "The Ladies' Literary, Moral Society." It was not public, and was built to provide books to Walpole that may, in the words of the society, "afford useful information to the mind and improvement to the heart."

In 1929, Harriet Nevins donated $50,000 for the erection of a public building as a memorial for her parents George Blackburn and Nancy H. Blackburn. Her father, a merchant from Bradford, England, had once lived and done business in Walpole. Blackburn Memorial Building (more commonly known as "Blackburn Hall") was designed by the architectural firm of Putnam & Cox Company of Boston, built by the F.J. Tetreault Company of Walpole, and dedicated in 1932. The red brick building, which features a neo-classical façade with whitewashed pillars, is still owned by the Town of Walpole and is used for a variety of activities throughout the year including children's theater production. to the Families of Boston and Eastern Massachusetts , Harriet Nevins also left $2500 to fund the construction of a fountain for horses and dogs. The fountain is now dry but still stands on School Street in Walpole opposite the Town Hall.

There were 8730 households out of which 35.4% had children under the age of 18 living with them, 63.2% were married couples living together, 8.4% had a female householder with no husband present, and 25.9% were non-families. 22.5% of all households were made up of individuals and 11.5% had someone living alone who was 65 years of age or older. The average household size was 2.72 and the average family size was 3.23.

Under the Köppen climate classification, Walpole has a humid continental climate (Dfa/Dfb), which is the predominant climate for Massachusetts and New England. Walpole's inland location causes it to experience cooler winter temperatures than many coastal locations in New England. Summers are typically hot and humid, while winters are cold, windy and often snowy.

Much like the rest of the Northeastern seaboard, Walpole receives ample amounts of precipitation year-round. On average, summer months receive slightly less precipitation than winter months. Walpole averages about 46 in (116.8 cm) of rainfall a year. Walpole, like other Massachusetts towns, is very vulnerable to Nor'easter weather systems. The town is sometimes vulnerable to Atlantic hurricanes and tropical storms, which infrequently threaten the New England region during the early autumn months. 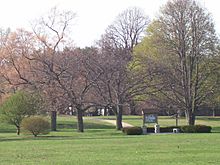 Walpole has many parks and athletic fields, which are mostly active during the spring and summer months due to the cold winter climate of Walpole and the surrounding area. Francis William Bird Park is located in Walpole. It is an 89-acre (360,000 m2) landscaped park, owned and maintained by The Trustees of Reservations. Over three miles (5 km) of walking and biking paths wind through the park, traversing streams across old granite bridges and passing through rolling, grassy meadows punctuated with mature shade trees, tree groves, and ponds.

Bird Park was created and endowed in 1925 by local industrialist Charles Sumner Bird, Sr. and his wife Anna in memory of their eldest son, Francis William Bird who had died seven years earlier in the influenza epidemic of 1918. Landscape architect and town planner John Nolen designed the park. A social reformer, Nolen believed that parks were critical to the health of urban residents and should be designed to provide a place of respite and relaxation in nature. In his original design plan, Nolen wrote that this park should be

"...a sequestered breathing place in the heart of East Walpole...a combination of broad, sun-swept meadow lands, speckled with shadowed glades, higher tree-screened knolls for the lover of shade, the whole set to the music of a babbling stream."

For most of its history, the park was owned and maintained by the Francis William Park Trust. By the later decades of the 20th century, parts of the park suffered badly from vandalism and neglect. The Trustees of Reservations gained possession of this property in 2002. Today the park is in excellent condition and several young ornamental trees such as Cherry and Japanese Maple have been added to the landscape, as have flower beds.

Commuter rail service from Boston's South Station is provided by the MBTA with the Walpole and Plimptonville stops on its Franklin Line.

Walpole is bordered by: Dover to the North, Westwood, Canton and Norwood to the Northeast, Sharon to the East, Foxboro to the South, Norfolk and Medfield to the West.

All content from Kiddle encyclopedia articles (including the article images and facts) can be freely used under Attribution-ShareAlike license, unless stated otherwise. Cite this article:
Walpole, Massachusetts Facts for Kids. Kiddle Encyclopedia.