Medfield is a town in Norfolk County, Massachusetts, United States. The population was 12,024 according to the 2010 Census. Medfield is an affluent community about 17 miles southwest of Boston, Massachusetts, which is a 45-minute drive to Boston's financial district. Attractions include the Lowell Mason house, Hinkley Pond and the Peak House.

The territory that Medfield now occupies was, at the time of colonization, Neponset land. It was apparently sold by the Neponset leader Chickatabot to William Pynchon in the late 1620s. In 1633, however, Chickatabot died in a smallpox epidemic that decimated nearby Neponset, Narragansett and Pequot communities. Because Chickatabot and Pynchon's deal left no written deed, the Massachusetts General Court ordered "those Indians who were present when Chickatabot sold lands to Mr. Pynchon, or who know where they were, to set out the bounds thereof". Fifty years later, Chickatabot's grandson Josias Wampatuck brought a land claim against Medfield and the other towns created within the borders of the Chickatabot purchase, for which he received payment. Of those lands, Dedham was the first town formed.

Dedham was incorporated in 1636, and Medfield (New Dedham) was first settled in 1649, principally by people who relocated from the former town. The first 13 house lots were laid out on June 19, 1650. In May 1651, the town was incorporated by an act of the General Court as the 43rd town in Massachusetts.

The Rev. Ralph Wheelock is credited with the founding of Medfield. He was the first schoolmaster of the town's school established in 1655, and now has an elementary school named after him. 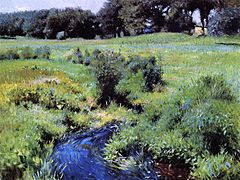 Half the town (32 houses, two mills, many barns and other buildings) was destroyed by Native Americans during King Philip's War in 1675. One house, known as the Peak House, was burnt in the war but was rebuilt shortly thereafter near downtown Medfield.

The town's boundaries originally extended into present-day Medway and Millis. In 1713 the town was divided, with the section west of the Charles River becoming the new town of Medway.

Hispanic or Latino of any race were 0.90% of the population.

Medfield's Free Public Library began in 1873. The public library is located on Main Street. In the late 18th century some of the residents of Medfield and surrounding towns formed a subscription library, called the Medfield Social Library. 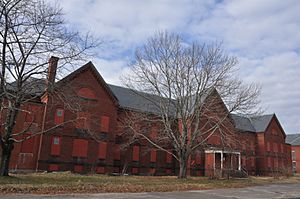 Medfield State Hospital, located at 45 Hospital Road, opened in 1896 and originally operated on 685 acres (2.77 km2) of pasture. At its peak in 1952, it housed 1,500 patients. By 2001, it was down to about 300 acres (1.2 km2) and employed 450 people (including four psychologists) to care for a maximum of 147 patients. The cost to the Commonwealth of Massachusetts was $21.5 million. On April 3, 2003, the doors were closed. Although the buildings are not open to the public (they have been boarded up), the grounds may be visited during daylight hours. 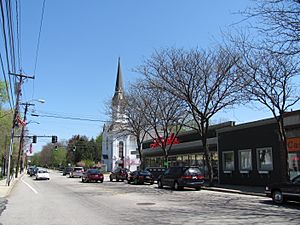 All content from Kiddle encyclopedia articles (including the article images and facts) can be freely used under Attribution-ShareAlike license, unless stated otherwise. Cite this article:
Medfield, Massachusetts Facts for Kids. Kiddle Encyclopedia.