Sherborn shares its highly ranked public school system with the town of Dover. In addition to Dover, Sherborn is bordered by the towns of Natick, Framingham, Ashland, Millis, Holliston, and Medfield.

Primarily a farming community until the early part of the 20th century, Sherborn now is a bedroom town for Boston and the surrounding hi-tech area.

Little is known about the local indigenous people. There appear to have been permanent settlements, for the earliest deed of one area refers to the "old fields"; and various implements have been both plowed up and found at Rocky Narrows and near Farm Pond. However, even the name of the tribe is uncertain, for Sherborn seems to have been at the interface between the Massachusetts and the Nipmuck tribes. Several Indians kept land in town after its incorporation (e.g. Peter Ephriam on Brush Hill and Thomas Awussamoag); they appear to have been connected with the Natick "Praying Indian" community.

The whole Charles River valley from South Natick to the falls at Medway kept its Indian name "Boggestow"; it was sought out by the English because of the abundant marsh grass growing on the wide flood plain. The earliest Sherborn land owned by the English took the form of large (200-1074 acres) grants called "farmes" made by the General Court beginning in the 1640s to individuals for payment of services rendered to the colony. These owners later sold land to settlers, the first resale being to Thomas Holbrook, and Nicholas Wood in 1652. They and successive settlers bought those wilderness lands and lived there while retaining their citizenship in the nearest incorporated town: Medfield.

By 1674 Boggestow had grown sufficiently to be incorporated as a new town (i.e. the land had never been part of another town) and was arbitrarily named "Sherborne" by the General Court. The original area was of such an awkward shape that the General Court allowed an exchange of 4,000 acres (16 km2) with the Natick Indians in 1679; and it was that new land which formed most of the present town. Henry Sherburne was Associate Judge of the Court at Strawberry Bank, 1651–52; Town Clerk & Treasurer 1656; Commissioner 1658; and Deputy to the Massachusetts General Court in 1660 - this could explain the origin of the town's name.

In the decade after King Philip's War (1675-6) Sherborn settlers organized the local government and drew up a Social Covenant, paid the Indians for land title, attracted a saw miller, built a Meeting House and called the first minister, and granted home lots throughout most of the present town. In the second decade they formed a town militia company, hired a schoolmaster, and acquired a gristmill. Thus by 1700 they had become an "established" town.

Throughout the 17th, 18th and 19th centuries Sherborn remained a small and relatively self-sufficient farming community. Little industry developed because of the lack of good water power, although there continued to be saw and gristmills on several of the small, intermittent streams. However, apples grew well, and there were always small cider mills. With the coming of both the railroad and steam power one mill developed further, John Holbrook and Sons, until by the 1890s it was advertised as the "largest refined cider mill in the world". At that time it pressed over 1.25 million gallons of cider per season and exported "Champagne" cider as far west as Nebraska and Texas and as far east as England and Belgium.

The early 20th century saw several new trends. In the early 1900s several wealthy families moved into different parts of town and built estates for either year-round or summer use. Those remaining today are located primarily along the Charles River - The area of first settlement. Dairy and poultry raising increased in importance, as did service related jobs.

Following World War II the town began to change rapidly from one with a relatively static population (c. 1500) to a growing and transient one. Developments were built in 1, 2, and 3-acre (12,000 m2) zones. The disappearance of family farms accelerated as the town became increasingly suburban; today estate-farms form most of the few farms which remain. Over 50% of the town's area is open space. The town is trying hard to retain its rural character; but that is increasingly difficult as land prices and taxes escalate. 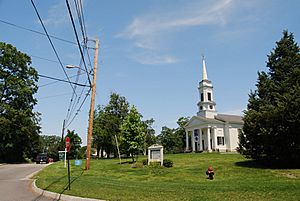 In the late 1990s and the early 21st century, the downtown area underwent significant expansion, including the construction of a new fire department, the addition of a skate park for the town's youth in 2002, and in 2005, new stores in a lot previously occupied by a decrepit, closed gas station. C & L Frosty's is a popular diner in the downtown area, as well as "The Heritage" which is a recently renovated inn previously known and owned as the "Sherborn Inn". Many people also visit the Sherborn Library which currently is undergoing a serious renovation as voted by the town (one million dollars were allocated to them to build a recreations room, purchase some art to decorate the walls, and a number of other new features). Today, most of the children attend the Pine Hill Elementary School for grades 1-5, and most Sherborn students attend the joint Middle/High School shared with the adjacent town of Dover for grades 6-12.

Because the town was relatively poor in the late 19th century and early 20th century, few people "modernized" their old houses by tearing them down and rebuilding. As a result, many of the houses built in the 18th century and early 19th century remain, as well as six or more with portions dating from the late 17th century. Two National Register Historic Districts have been established to include the old Town Center and a two-mile (3 km) strip along North Main Street; and scattered individual houses have also been listed: a total of 77 old houses. A very small Town Historic District also exists in the old Town Center. There are many houses that still stand that were built before the Revolutionary War.

The former house of Colonel Samuel Bullard (1733–1807) was acquired by developers in the 1980s for adaptive reuse as an inn. Sadly however, the structure was almost entirely demolished, leaving but a few of the most basic of framing timbers. Only a handful of interior architectural features survived the destruction consisting mostly of a mantle piece, a chair rail and some wainscotting. The present structure, incorporating the few remaining described features, was built in the 1980s and was first known as The Sherborn Inn. It is now named Heritage of Sherborn. Because of the destruction of the Bullard House, the house and site designation as historic, was removed from The National Register of Historic Places and Sites as well as The Massachusetts Historical Register.

Many old antique houses have hiding places along the Underground Railroad built back in the 1800s. They have trap doors, secret rooms, and old passages for runaway slaves.

The town is governed by a combination of elected and appointed volunteers and a few key salaried officials. Since town government was set up c. 1678 it has been run by the Selectmen (5 at present) and the traditional open Town Meeting, at which all citizens vote annually on major expenditures and policies. There is no industry zoned in the town. Property taxes support town government and services. Public services are minimal and homeowners rely on individual wells and septic systems. There is a full full-time Police Force and Highway Dept. and both a volunteer "call" Fire Dept. and a rescue Squad, all highly trained. The town has three churches and a modern public library. The schools are small and excellent; the elementary school is local, whereas the junior and senior high schools are regionalized with Dover, a town located to the east. Town Boards and other organizations depend almost entirely upon volunteer participation, as they have for over three hundred years.

There were 1,423 households out of which 46.2% had children under the age of 18 living with them, 77.5% were married couples living together, 6.3% had a female householder with no husband present, and 14.1% were non-families. 12.4% of all households were made up of individuals and 6.0% had someone living alone who was 65 years of age or older. The average household size was 2.95 and the average family size was 3.22.

All content from Kiddle encyclopedia articles (including the article images and facts) can be freely used under Attribution-ShareAlike license, unless stated otherwise. Cite this article:
Sherborn, Massachusetts Facts for Kids. Kiddle Encyclopedia.