Ashland is a town in Middlesex County, Massachusetts, United States. It is part of the MetroWest region. The population was 16,593 at the 2010 census.

The area now known as Ashland was settled in the early 18th century and inhabited prior to that by the Megunko Native Americans, to which Megunko Hill owes its name. Previously known as "Unionville," Ashland was incorporated in 1846, bearing the name of statesman Henry Clay's Kentucky estate. It is considerably younger than many of the surrounding towns, as Ashland's territory was taken in near-equal parts from the previously established towns of Hopkinton, Holliston, and Framingham.

The construction of the Boston & Worcester Railroad, later the Boston & Albany, in the 1830s was key to the early development of the town. Decades later, two other rail lines opened stations in Ashland. Along with the Sudbury River, the railroad helped to attract numerous mills to develop a bustling boot and shoe industry. However, by constructing three reservoirs along the river in 1878, the Boston Water Board inadvertently stymied further growth, most notably by halting the construction of the Dwight Printing Company's granite mills. Although the mills closed, starting in the 1890s the Hopkinton Railroad Company, providing a connection to Milford, and the Natick Street Railway, which operated streetcars between the towns of Sherborn, Framingham, and Natick, offered service in Ashland. These rail lines were gone by the 1920s, rendered obsolete by automobiles.

Around the same time that the local rail lines were in decline, the inventor Henry E. Warren developed the Warren Synchronizing Timer in 1916, which made synchronous electric clocks possible by keeping alternating current flowing from power plants at a consistent sixty cycles per second. Warren founded Telechron, which, in partnership with General Electric, manufactured electric clocks in Ashland until 1979. A Warren Synchronizing Timer is on display at the Smithsonian's Museum of American History in Washington D.C., and the Ashland High School sports teams are coined "The Clockers."

For most of the 20th century, Ashland's population remained slow in growth, until the post-war boom beginning in the 1950s. During that period, Ashland grew from a far-removed rural town 22 miles (35 km) west of Boston to a primarily residential suburb by the 1980s. Over time, many farms and open spaces have given way to housing, although some untouched land still remains, including the Ashland Town Forest, Ashland State Park, Warren Woods, and land comprising the beach and dam portions of Hopkinton State Park.

Two major routes, 135 and 126, pass through Ashland. Route 135 is dominated by older residential development of varying density and is also part of the route for the Boston Marathon, which began in Ashland on Pleasant Street until the start was moved to Hopkinton's Main Street in 1924. Route 126 has developed rapidly since the 1980s, as farms have given way to shopping centers and condominiums. A part of the draw of Ashland, and one that has been publicized in recent years, is its "ideal" location about halfway between the cities of Boston and Worcester. Travel is easy, with its own stop on the Framingham/Worcester Commuter Rail Line and nearby access to both I-90 and I-495. Ashland is considered part of MetroWest, which also consists of the towns of Framingham, Holliston, and Hopkinton.

Even though Ashland has left its humble roots as a rural area, it still retains the look and feel of a typical residential Boston-area New England town. Traditions like Ashland Day and small-town favorites like the ice cream shop Tasty Treat and breakfast joint Sunnyside Cafe maintain the feeling of a close-knit community. Ashland's longstanding rival for the Thanksgiving Day football game is Hopkinton, a rivalry with roots in the formation of the town and the resulting 1846 dispute concerning Ashland's fire engine "Megunko 1."

Ashland is located in eastern Massachusetts, bordered by:

Ashland's climate is variable. Winters are typically cold, with frequent Nor'easters and occasional blizzards. Snowfall ranges widely from season to season, although the average is about 60 inches (150 cm). In the recent past, there has been as little as 14 inches (360 mm) of snow (in the 1988–89 winter season) to 148 inches (in 1995–96). The amount decreases dramatically eastward towards Boston because of the influence of the Atlantic Ocean. Snowfall amounts can also decrease rapidly south of Ashland. Low temperatures below zero are not uncommon in winter, and the lowest recent temperatures have been 17 below in January 1994, 14 below in January 2011 and 16 below in February 2016. Average January high temperatures are in the low 30s. Average January low temperatures are in the upper teens. Snow depth can reach two feet or more during the winter season. The winter of 2010–11 was notable for snow depths of nearly 40 inches during January and February. Nearly 60 inches of snowfall was recorded in Ashland in January 2011 alone. The winter of 2014–15 saw a very cold February and March. Snow cover lasted from late January until the first week of April. February 2015 was one of the coldest months on record. Snowfall for Ashland was 107.6" for the season. Snow depth reached 45". Spring temperatures can be mitigated by penetrating cold fronts originating from the Canadian Maritimes, known as "Backdoor Cold Fronts". Typically, high temperatures consistently above 70 degrees do not set in until late May. The last frost is usually in mid-May. Summers are generally comfortable, with periods of high humidity. Prolonged heat waves of three or more days with highs of 90 or above are uncommon but can occur. In July 2011 an unusually high temperature of 101 was reached. Average July high temperatures are in the low 80s and average lows are around 60. Severe summer weather is not as common as in areas to the west in Central Massachusetts. However, on July 10, 1989, high winds occurred, causing widespread tree damage through most of Ashland with several homes damaged. This storm was part of a complex of severe storms that spawned several EF0 and EF1 tornadoes in towns in some neighboring counties. Fall is pleasant with the first frost usually around October 1, and the peak of the fall foliage season averages around October 12. Ashland can expect a "white" Christmas slightly over 50 percent of the time.

There were 6,484 households of which 36.7% had children under the age of 18 living with them, 59.0% were married couples living together, 2.7% had a male householder with no wife present, 8.5% had a female householder with no husband present, and 29.8% were non-families. 24.9% of all households were made up of individuals and 9.1% had someone living alone who was 65 years of age or older. The average household size was 2.51 and the average family size was 3.04.

Ashland Day is typically held on the third Saturday in September, each year. The festivities occur near the center of town at Stone Park from the morning until the late afternoon, and include a number of booths and various carnival-like rides. Many of the school system's athletic clubs and organizations use the day as an annual fundraising event, but it serves primarily as a day for residents to enjoy numerous activities and delicious food. Traditionally, there are fireworks atop the dam at Hopkinton State Park (the dam is in Ashland), but budget cuts have canceled several recent displays. Ashland Day has only been canceled once, due to inclement weather, in 2004. The 25th Anniversary of the event, was held in 2010. For the first time in several years, fireworks were once again launched from atop the dam at Hopkinton State Park. 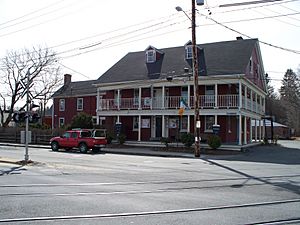 Built in 1832 by Captain John Stone, to capitalize on the new Boston and Worcester Railroad, The Railroad House, later renamed John Stone's Inn, and now known as Stone's Public House, is located in the center of Ashland.

The inn was purchased and renovated in 1976 by Leonard "Cappy" Fournier. During renovations, a hidden chamber was discovered in the basement, and it is speculated that this was used to house runaway slaves who made their way to freedom in the North along the Underground Railroad.

One notable guest of the hotel, Daniel Webster, gave a speech from the balcony on the day the first train arrived in 1834. Joining him for the inaugural train were Governor John Davis and former Governor Levi Lincoln.

Ashland State Park, Hopkinton State Park, Ashland Town Forest, and Warren Woods are all either completely or partially located within the town lines. Both state parks have a lake with hiking, biking and boating. Hopkinton State Park has swimming, boat rentals, fishing and horseback riding trails. Ashland State Park is 470 acres including a 157-acre reservoir. State budget cuts had led to the Park closing in 2009, but new funding let the Park reopen in July 2013. The Ashland Town Forest is 550 acres of forest, streams and hiking trails. The town recently purchased a parcel of land from Northeastern University which includes open fields and densely wooded area.

US Color and Chemical Company, later named New England Aniline Works, Inc., and finally The Nyanza Color and Chemical Company, had a dye-manufacturing plant in Ashland. The plant opened in 1917 when American entry into World War I cut off the supply of dyes from Germany, then the world's principal source. In 1971, the factory was identified as a hazard when pollution was discovered in the nearby Sudbury River. The site was placed on the Superfund National Priority List in 1982 when heavy metals and organochlorides were discovered in the soil and water near the site. It was also deemed probable that particles of mercuric sulfate were blown into the air. Cleaning up the contaminated site cost residents $55 million, and is still not complete as of 2013. The estates of the Nyanza executives were charged for the cleanup.

In 2006, the Massachusetts State Department of Public Health released a study that found that people who grew up in Ashland between the late 1960s and early 1980s and swam in the waters near Nyanza had a 200-300% higher incidence of cancer than those who were not exposed to the chemicals.

In 2011, the Massachusetts Department of Environmental Protection's Bureau of Waste Site Cleanup's Natural Resource Damages (NRD) program settled with the slowly-going-bankrupt Nyanza for $3 million, which with interest has grown to almost $4 million. The Nyanza case had previously been at the NRD program of the Massachusetts Executive Office of Energy and Environmental Affairs.

Opened September 6, 1986, Sri Lakshmi Temple is a large regional Hindu temple located on Waverly Street and is the largest such temple in New England. Sri Lakshmi temple hosts several Hindu functions throughout the year. First housed in a Knights of Columbus Hall in Melrose in 1978 and later in the Needham Village Club, the congregation purchased about 12 acres (49,000 m2) of land from Ashland in 1981.

Commuter rail service from Boston's South Station is provided by the MBTA with the Ashland station on its Framingham/Worcester Line. The station is accessible from either Pleasant St or from an access road off of Union St that runs behind Ashland Middle School.

All content from Kiddle encyclopedia articles (including the article images and facts) can be freely used under Attribution-ShareAlike license, unless stated otherwise. Cite this article:
Ashland, Massachusetts Facts for Kids. Kiddle Encyclopedia.