Holliston is a New England town in Middlesex County, Massachusetts, United States in the Greater Boston area. The population was 13,547 at the 2010 census. It is part of the Massachusetts region, located due west of Boston, that is known as the MetroWest. Holliston is the only town in Middlesex County that borders both Norfolk and Worcester counties. 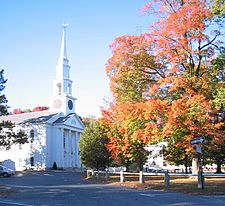 First Congregational Church of Holliston on the church green. This is the site of Holliston's original meeting house.

A 19th century depiction of Holliston's original meeting house. Built in 1725, it served as the center of all town affairs until being razed 1822 for the present-day First Congregational Church and the town hall.

At the time of the earliest European settlements, where Holliston exists now was part of the territory of the Awassamog family of Natick (the first Nipmuc Praying Town), who also held authority over land near Waushakum Pond at Framingham and land near Annamasset at Mendon. In 1701, a large tract of land that included the west half of Holliston, eastern Milford and parts of Hopkinton and Ashland was given to the local Nipmucs in a land exchange with Sherborn. Their ownership of the tract was brief, as settlers purchased tracts of land there until all traces of Nipmuc presence disappeared. The Nipmuc village of Mucksquit (translation – “place of much grass”), located on the shore of Wennakeening (translation – “smile of the great spirit”) was near the site of the Morse family farm, today known as Lake Winthrop. The Morses, Sheffields, Marshalls and Bullards and many others followed Pout Lane (an old Native American foot-path, now partly modern day Rte 16 and Highland St., respectively) out to the new territory and settled along the path, thus forming a cluster of farms that would eventually become Holliston. John Eliot and Daniel Gookin (Christian missionaries) also followed the path in search of converts to Christianity and encouraged the Nipmucs to gather into villages, which made their task of finding them easier. Though not as famous as the Bay Path or the Old Connecticut Path, Pout Lane played a major role in the settlement of Holliston and other points southwest of Boston. Holliston, then part of Sherborn, was first settled by Europeans in 1659 by Massachusetts Bay Puritans. The town of Holliston was incorporated on December 3, 1724, by virtue of approval by the General Court petition requesting that "the western part of Sherborn be a Town." The name was taken in honor of Thomas Hollis of London, a benefactor of Harvard College. The first town meeting was held at the house of Timothy Leland on December 23, 1724, "at which five selectmen and all other required officers were chosen." The town has grown from a community of a few hundred residents setting aside ten pounds per year for public education to a community of over 13,000 with an annual budget of over $40 million including more than $23 million for a nationally recognized school system.

In "Holliston" by Images of America and the Holliston Historical Society, it is written: An article in a local newspaper in 1894 heralded the charms of Holliston as the quintessential New England village, which, the story said, sprang into existence solely due to the talent of its people. Perhaps this is so, for there was no great moment in history to mark the founding of this town. Holliston has become a reflection of the accomplishments of the inhabitants of this place for more than three hundred years, and although the town had to admit to no magnitude of greatness to rival Boston, Lexington, or Concord, Holliston did define itself as a home to heroes of the commonplace. The feature story of 1894 said:

"Many cities have sprung into existence because of their advantageous situations. The prosperity of Holliston is solely due to the genius of its people. A visit to such places stirs the blood, quickens the pulse and produces an enthusiastic desire to have a share in the developing good times. Massachusetts may be Whittier's land, and the region from Marblehead to Amesbury may be full of legendary and spectral armies, and witchdom, and Buddha knows what, but the imaginative and the poetical must submit to the rights of the commonplace. The commonplace is honeycombed with the uncommon heroisms of the patient, everyday existence that make up the life of such plucky towns as Holliston. These are the things the average man is most interested in. Average life is but a portfolio of views of struggles with the commonplaces of everyday existence" (Holliston 1997).

The town was once the largest producer of shoes in the United States. Although many of the shoe factories have been lost by fires and other problems, the largest company, the Goodwill Shoe Company, still has remaining empty factories on Water Street, many of which are now used as artists' studios. Competition from overseas factories is largely to blame for the loss of the industry.

Holliston's Mudville neighborhood claims to be the location of the 1888 Ernest Lawrence Thayer poem, "Casey at the Bat", and maintains an ongoing rivalry with Stockton, California, which makes the same claim regarding the poem's setting.

The Legend of Balancing Rock 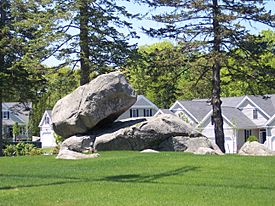 On the north side of Route 16 heading into Milford sits a large rock, some 20 ft (6.1 m) in length, 10 ft (3.0 m) in width, 6 ft (1.8 m) thick, and weighing easily over 5 tons (4.5 metric tons). The rock appears to be balanced precariously on an outcrop of granite ledge. On November 6, 1789, General George Washington led his entourage from Boston to New York via this route. He recalled in his diary the road in Holliston that would eventually be honored with his name, "an indifferent road, diversified by good and bad land, cultivated and in woods, some high barren, others low, wet and piney." Legend has it that, as they came across this "Balancing Rock," they took the opportunity to have some fun and tried their best to tip over the rock. It is said that the General himself, quite amused at the spectacle, added his muscle in an attempt to push the rock off its natural pedestal. Their efforts — and those of many others over the years — were to no avail as Balancing Rock still stands today. The rock is on the property of the Balancing Rock development, a community for "active" adults over the age of 55.

Once populated by factories and farms up until the latter part of the nineteenth century, Holliston has now transformed itself into a bedroom community for Boston and the Route 128 and Route 495 technology belts. Holliston is known for its quaint Town Center with its Fiske's General Store, the Superette, numerous antique shops and boutiques, Carnegie public library, town hall, and white-steepled churches. Numerous white antique colonial, Greek revival, and Victorian homes with well-manicured lawns dot the landscape along Washington Street (Massachusetts Route 16), with Holliston Center and the Town Green wedged in between—a scene reminiscent of the distinctive New England character.

The average work commute for Holliston residents, however, is quite long. On average, people spend 32.25 minutes each day getting to work, which is significantly higher than the national average. Being a small town, Holliston does not have a public transit system that can be used by locals to get to and from work. Residents who want to take public transportation into Boston must drive to one of the commuter rail stations in Ashland, Natick, Framingham, or Franklin.

The town is the setting for the popular FEARnet series "Holliston"

With a history spanning nearly three centuries, Holliston has many smaller divisions within its borders with names tied to a host of historic and cultural origins. Although the town is only served by one post-office today, several of its historic villages originated from previous post offices as well as train stops on the Boston and Albany Railroad's Milford line. Today the town retains two official historic districts, both of which contain smaller landmark areas of historic significance. There are several additional residential developments and other areas of Holliston which retain their own colloquial names, however at this time the following are the only areas officially recognized as historic by the town and the U.S. Geologic Survey.

Holliston is located in eastern Massachusetts, bordered by:

There were 4,795 households out of which 44.2% had children under the age of 18 living with them, 70.2% were married couples living together, 7.5% had a female householder with no husband present, and 19.9% were non-families. 16.4% of all households were made up of individuals and 6.0% had someone living alone who was 65 years of age or older. The average household size was 2.87 and the average family size was 3.25.

In 2009, 79% of Holliston residents age 25 and over held bachelor's degrees or higher and 35.8% held graduate or professional degrees. 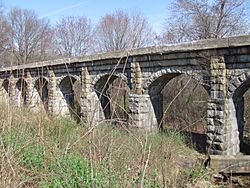 Refer also to Town of Holliston, Parks and Recreation for information on use.

All content from Kiddle encyclopedia articles (including the article images and facts) can be freely used under Attribution-ShareAlike license, unless stated otherwise. Cite this article:
Holliston, Massachusetts Facts for Kids. Kiddle Encyclopedia.