Milford is a town in Worcester County, Massachusetts, United States. The population was 27,999 according to the 2010 census. First settled in 1662 and incorporated in 1780, Milford became a booming industrial and mining community in the 19th century due to its unique location which includes the nearby source of the Charles River, the Mill River, the Blackstone River watershed, and large quantities of Milford pink granite.

Milford was first settled in 1662 as a part Mendon. The King Philip's War destroyed the town in 1676, but settlers returned in 1680. The Mill River flows through Milford and had several conspicuous fords that were familiar to the Native Americans, and used by the early white settlers. These "Mill (river) fords" gave Milford its name. Milford was incorporated April 11th, 1780 and the first Town Hall built in 1819; a brick structure later named the Town House School. The Milford Town Hall was built in 1854 by architect Thomas Silloway.

Milford is renowned for its pink Milford granite, discovered in 1870. Milford quarries fueled the local economy until about 1940. The granite has been used for local buildings such as Memorial Hall, the Bancroft Memorial Library in Hopedale, Worcester City Hall, and the Boston Public Library. Other notable buildings include the original Pennsylvania Station in New York City, the main post office in New York City, and most recently the Singapore Changi Airport in 2002. The Battle Monument at West Point is also made of Milford granite, and is reputed to be the largest column of polished granite in the Western Hemisphere.

The Milford Hospital was donated in 1903 by Governor Eben Sumner Draper. Today, the health care facility exists as the Milford Regional Medical Center. In January 2008, the Center opened a cancer treatment facility with the Dana–Farber Cancer Institute. The Center is affiliated with UMass Medical Center as a teaching hospital. In 2015 the hospital completed a $54 million expansion project that created a new emergency department and updated the intensive care unit, as well as patient rooms.

Milford is located in Eastern Massachusetts, bordered by:

There were 10,420 households out of which 33.4% had children under the age of 18 living with them, 54.0% were married couples living together, 11.2% had a female householder with no husband present, and 30.9% were non-families. 25.6% of all households were made up of individuals and 9.5% had someone living alone who was 65 years of age or older. The average household size was 2.54 and the average family size was 3.08. 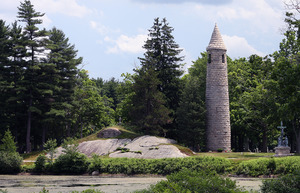 All content from Kiddle encyclopedia articles (including the article images and facts) can be freely used under Attribution-ShareAlike license, unless stated otherwise. Cite this article:
Milford, Massachusetts Facts for Kids. Kiddle Encyclopedia.