Hopedale is a town in Worcester County, Massachusetts, United States. The population was 5,911 at the 2010 census. 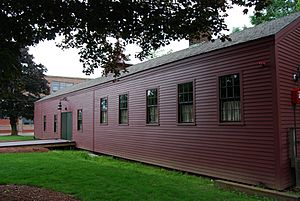 Hopedale was first settled in 1660. Benjamin Albee built a mill on what is now the south end of Hopedale in 1664. A 64-square-mile (170 km2) area of the Blackstone Valley was incorporated as the town of Mendon. In 1780, Milford separated from Mendon. On August 26, 1841, Adin Ballou, along with the Practical Christians, gave Hopedale its name, within the town of Milford. Ballou and the Practical Christians established the Hopedale Community based on Christian and socialist ideologies in 1842. The town was officially incorporated in 1886 when it separated from Milford. In 1905, women were granted permission to swim at the town beach.

Hopedale was once home to the Draper Corporation, once the largest maker of textile looms in the United States. The company was acquired by Rockwell International in 1967.

Hopedale is included in the Blackstone River Valley National Heritage Corridor and is an historic mill village of national significance.

Hopedale is located in central Massachusetts, bordered by 4 towns:

There were 2,240 households out of which 35.8% had children under the age of 18 living with them, 58.8% were married couples living together, 8.8% had a female householder with no husband present, and 29.8% were non-families. 25.9% of all households were made up of individuals and 12.8% had someone living alone who was 65 years of age or older. The average household size was 2.58 and the average family size was 3.13.

There are currently three houses of worship in Hopedale.

All content from Kiddle encyclopedia articles (including the article images and facts) can be freely used under Attribution-ShareAlike license, unless stated otherwise. Cite this article:
Hopedale, Massachusetts Facts for Kids. Kiddle Encyclopedia.