Braggville is a former postal village located in Massachusetts, now within the towns of Holliston in Middlesex County, Medway in Norfolk County and Milford in Worcester County. Though people had settled the land long before the incorporation of the town of Holliston, Braggville's unofficial history began on March 8, 1785 when Alexander Bragg purchased farmland there. The village itself however, would be named for his nephew, Colonel Arial Bragg, Holliston's first shoe and boot maker as well as the agrarian community's first wholesale manufacturer. After a century of economic prowess, the village fell into decline following the First World War.

With the emergence of the Post–World War I recession much of the town's business came to a standstill. By March 1919, the Boston and Albany Railroad had ceased providing passenger service to the Braggville station, as well as all freight service. Although its schoolhouse would remain standing for several more decades, the end of Braggville as a would-be town came in June 1919, when the U.S. Mail shuttered its post office. 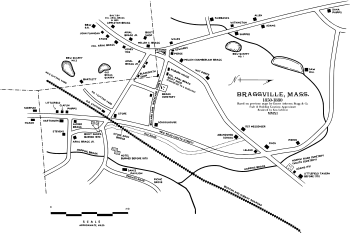 A map of Braggville, as it appeared at the village's industrial and cultural peak between the years of 1850 and 1880.

Braggville does not have official borders defined by the United States Census Bureau, and throughout its history has held nebulous boundaries. The U.S. Geological Survey places it as a populated place solely in the town of Holliston, however historical accounts describe it as partially extending into Milford and Medway

It is located 25.2 mi (40.6 km) west of Boston and is adjacent to Interstate 495. Massachusetts Route 16 passes through the village, bisecting it almost evenly.

Braggville is located in eastern Massachusetts, and bordered by:

All content from Kiddle encyclopedia articles (including the article images and facts) can be freely used under Attribution-ShareAlike license, unless stated otherwise. Cite this article:
Braggville, Massachusetts Facts for Kids. Kiddle Encyclopedia.