Jo Dee Marie Messina (born August 25, 1970) is an American country music artist. She has charted nine number one singles on the Billboard country music charts. She has been honored by the Country Music Association, the Academy of Country Music and has been nominated for two Grammy Awards. She was the first female country artist to score three multiple-week Number One songs from the same album. To date, she has two Platinum and three Gold-certified albums by the RIAA.

Messina debuted in 1996 with the single Heads Carolina, Tails California. Her album was certified Gold by the RIAA. Her second album, I'm Alright, produced five Top 10 Country hits between 1998 and 1999, and sold over a million copies in America. Since her debut, six of her singles have peaked at No.1 on the Billboard Country singles chart and five of her albums have received a certification by the RIAA or the CRIA. She has sold over 5 million records worldwide.

Messina was born Jo Dee Marie Messina on August 25, 1970, in Framingham, Massachusetts to Vincent and Mary Messina. Her father, of Italian descent, and mother, of Irish descent, raised her in Holliston, Massachusetts alongside sisters, Terese and Marianne, and a brother, Vincent.

At an early age, Messina's love for music blossomed. She drew influence from a variety of country music artists, including Patsy Cline, Reba McEntire, and The Judds. By age 16 she was playing local clubs, singing while her brother and sister provided backup on drums and guitar. The group continued performing until Jo Dee graduated from high school.

Realizing that living in the Northeast would limit her chances of achieving country music stardom, Messina moved to Nashville, Tennessee at age 19. She worked various temp jobs, including computer programming and accounting, while entering talent contests around Nashville.

One win led to a regular gig on the radio show Live at Libby's, which caught the interest of producer Byron Gallimore, who helped her assemble a demonstration tape. Gallimore was also working with the young Tim McGraw around the same time, and Messina befriended him. Backstage at one of his concerts, McGraw met an executive from his label, Curb Records, and jokingly suggested that they needed a redhead. With the help of fellow Curb producer James Stroud, Messina was soon signed to the record label. Gallimore and McGraw would later become co-producers of Messina's studio albums for Curb. 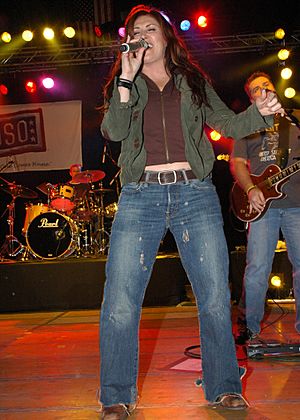 All content from Kiddle encyclopedia articles (including the article images and facts) can be freely used under Attribution-ShareAlike license, unless stated otherwise. Cite this article:
Jo Dee Messina Facts for Kids. Kiddle Encyclopedia.