Jasper is a specialized municipality and townsite in western Alberta within the Canadian Rockies. The townsite is in the Athabasca River valley and is the commercial centre of Jasper National Park.

Established in 1813, Jasper House was first a North West Company, and later Hudson's Bay Company, fur trade outpost on the York Factory Express trade route to what was then called "New Caledonia" (now British Columbia), and Fort Vancouver in Columbia District on the lower Columbia River.

Jasper National Park was established in 1907. The railway siding at the location of the future townsite was established by Grand Trunk Pacific Railway in 1911 and originally named Fitzhugh after a Grand Trunk vice president (along the Grand Trunk's "alphabet" line). The Canadian Northern Railway began service to Fitzhugh in 1912. The townsite was surveyed in 1913 by H. Matheson. It was renamed Jasper after the former fur trade post. An internment camp was set up at Dominion Park in Jasper from February 1916 to August 1916.

By 1931, Jasper was accessible by road from Edmonton, and in 1940 the scenic Icefields Parkway opened, connecting Lake Louise and Jasper.

Jasper is located in the Athabasca River valley, at the confluence with Miette River. It lies between the Victoria Cross Ranges (northwest), Pyramid Mountain (north), Maligne Range (southeast) and Indian Ridge (southwest).

Jasper is connected to the west via the Yellowhead Highway and the Yellowhead Pass to Prince George and to the east to Edmonton. Toward the south, the Icefields Parkway leads to Banff and Banff National Park.

Located near Jasper are Pyramid Lake and Patricia Lake, as well as Lake Annette, Lake Edith, Lac Beauvert, Maligne Lake, Medicine Lake and other smaller lakes. The Jasper Skytram, which takes visitors to The Whistlers' summit, and the Marmot Basin ski resort are located near the town, as is the Fairmont Jasper Park Lodge. The Jasper-Yellowhead Museum and Archives is located in the Jasper town site, as is the Jasper Visitor Centre. 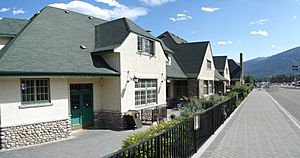 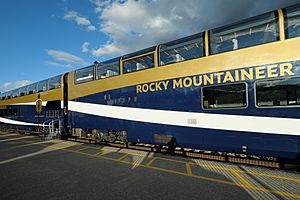 Jasper railway station is served by Via Rail with two passenger services. The Canadian and the Jasper–Prince Rupert train both operate three times per week.

Jasper's educational services are provided by:

All content from Kiddle encyclopedia articles (including the article images and facts) can be freely used under Attribution-ShareAlike license, unless stated otherwise. Cite this article:
Jasper, Alberta Facts for Kids. Kiddle Encyclopedia.