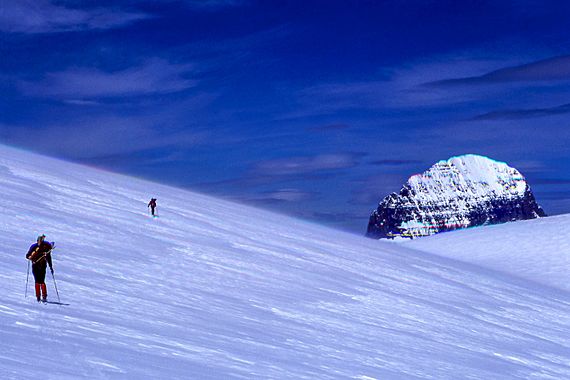 Mount Alberta from a high shoulder of the Columbia Icefield; on the way to The Twins (N & S). The ramp to the right leads to the Stutfields (E & W)

The Columbia Icefield is the largest ice field in North America's Rocky Mountains. Located within the Canadian Rocky Mountains astride the Continental Divide along the border of British Columbia and Alberta, Canada, the ice field lies partly in the northwestern tip of Banff National Park and partly in the southern end of Jasper National Park. It is about 325 square kilometres (125 sq mi) in area, 100 metres (330 ft) to 365 metres (1,198 ft) in depth and receives up to 7 metres (280 in) of snowfall per year.

The Columbia Icefield was formed during the Great Glaciation, or Illinoisan period (238,000 to 126,000 BCE). The initial advancement of the ice field ended during the latter millennia of the Early Wisconsinan period (73,000 to 62,000 BCE), around the time Homo sapiens began to appear on the earth. The next major advance of the ice field occurred during the Late Wisconsinan period (18,000 to 9,000 BCE), which marked the end of the major intercontinental land mass bridges. During the Crowfoot Glacier advance (9,000 to 7,000 BCE), humans were beginning to learn farming along the Tigris, Euphrates, and Nile rivers. The last major period of advance occurred during the Little Ice Age, which lasted from about 1,200 to 1900 AD. Around 1800, the Athabasca Glacier peaked, then went through a period of recession, and then advanced again until 1840, when it began receding until the present day.

The Columbia Icefield was one of the last major geological features in western Canada to be visited and recorded by Europeans, due to its isolation and harsh weather conditions. In April 1827, Scottish botanist David Douglas was crossing Athabasca Pass—a major trading route located north of the Icefield—when he climbed one of the adjacent mountain peaks. He reported his first ascent in his journal, describing it to be 6,000 metres (20,000 ft) in height. In the summer of 1884, geology professor Arthur Philemon Coleman explored the Great Divide from Banff to Jasper in search of Douglas' giant peak. While unsuccessful, he did discover the route that would become the Icefield Parkway. In July 1898, British explorer J. Norman Collie and his friends Hugh Stutfield and Herman Wooley set off in search of Douglas' giants, equipped by the famous Banff outfitter Bill Peyto. On the morning of August 18, Collie and Wooley climbed the east side of Mount Athabasca, moved up the glacier when the ridge gave way to crumbling rock, and made their way to the summit, where they discovered an ice field that extended to almost every horizon. Collie later wrote: 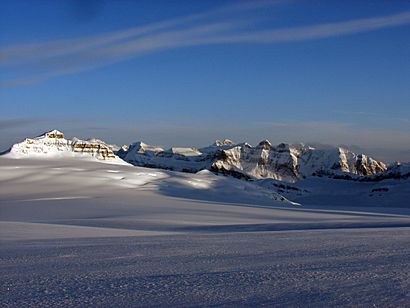 The view that lay before us in the evening light was one that does not often fall to the lot of modern mountaineers. A new world was spread at our feet: to the westward stretched a vast ice-field probably never before seen by the human eye, and surrounded by entirely unknown, unnamed and unclimbed peaks.

In 1900, former British clergyman James Outram came to the Canadian Rockies to recover his health after a nervous breakdown. The following year he made the first ascent of Mount Assiniboine (3,618 m, 11,870 ft), then considered the "Matterhorn of the Rockies". In 1902, Outram made ten first ascents of peaks over 3,050 metres (10,010 ft) and discovered four new mountain passes in the Columbia Icefield area. Two of his first ascents in 1902 were Mount Columbia (3,747 m, 12,293 ft) and Mount Bryce (3,507 m, 11,506 ft), one of the most dangerous and difficult summits in the Rocky Mountains.

In March 1932, three men undertook a remarkable skiing journey from Jasper to Banff that covered about 500 kilometres (310 mi). When Cliff White, Joe Weiss, and Russell Bennet reached the Columbia Icefield, they climbed to the summit of Snow Dome, and then made a downhill run descent of almost 3,000 metres (9,800 ft) which lasted for 50 kilometres (31 mi)—the longest continuous ski run in Canadian history up to that point. Their accomplishment played a major role in generating worldwide interest in the Canadian Rockies. Today, mountaineers and skiers from around the world come to the Columbia Icefield to explore some of the classic routes discovered by these early pioneers of mountaineering.

Parts of the Columbia Icefield and part of other icefields and glaciers are visible from the Icefields Parkway.

The icefield was first reported in 1898 by J. Norman Collie and Hermann Woolley after they had completed the first ascent of Mount Athabasca.

The Athabasca River and the North Saskatchewan River originate in the Columbia Icefield, as do tributary headwaters of the Columbia River. As the icefield is atop a triple Continental Divide these waters flow ultimately north to the Arctic Ocean, east to Hudson Bay (and thence to the North Atlantic Ocean), and south and west to the Pacific Ocean. Hudson Bay, in some watershed divisions, is considered to be in the Arctic watershed, in which case this would arguably not be a triple continental divide point. 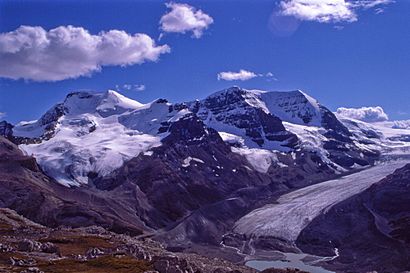 Mts. Athabasca & Andromeda, Athabasca Glacier and a sliver of the Columbia Icefield from Wilcox Pass 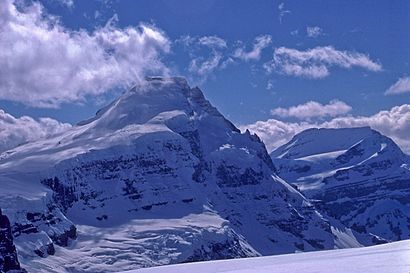 Some of the highest mountains in the Canadian Rockies are located around the edges:

All content from Kiddle encyclopedia articles (including the article images and facts) can be freely used under Attribution-ShareAlike license, unless stated otherwise. Cite this article:
Columbia Icefield Facts for Kids. Kiddle Encyclopedia.