The Athabasca River (French: Rivière Athabasca) is a river in Alberta, Canada, which originates at the Columbia Icefield in Jasper National Park and flows more than 1,231 km (765 mi) before emptying into Lake Athabasca. Much of the land along its banks is protected in national and provincial parks, and the river is designated a Canadian Heritage River for its historical and cultural importance. The scenic Athabasca Falls is located about 30 km (19 mi) upstream from Jasper.

The name Athabasca comes from the Woods Cree word aðapaskāw, which means "[where] there are plants one after another", likely a reference to the spotty vegetation along the river.

The Athabasca River originates in Jasper National Park, in an unnamed lake at the toe of the Columbia Glacier within the Columbia Icefield, between Mount Columbia, Snow Dome, and the Winston Churchill Range, at an elevation of approximately 1,600 metres (5,200 ft). It travels 1,231 km (765 mi) before draining into the Peace-Athabasca Delta near Lake Athabasca south of Fort Chipewyan. From there, its waters flow north as Rivière des Rochers, then join the Peace River to form the Slave River, which empties into the Great Slave Lake and discharges through the Mackenzie River system into the Arctic Ocean. The cumulative drainage area is 95,300 km2 (36,800 sq mi). 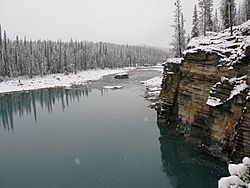 Sekani, Shuswap, Kootenay, Salish, Stoney, and Cree tribes hunted and fished along the river prior to European colonization in the 18th century. From about 1778, the Athabasca River, the Clearwater River, which enters the Athabasca River from the east at Fort McMurray, and the Methye Portage were part of a primary fur trade route from the Mackenzie River to the Great Lakes (see Canadian Canoe Routes (early)). 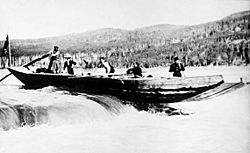 A Hudson's Bay Company scow in the Athabasca River, c. 1910

David Thompson and Thomas the Iroquois traveled through Athabasca Pass in 1811. In 1862, the Athabasca Springs area was crossed during the Cariboo Gold Rush by the Overlander Party.

The northern segment of the Athabasca River became part of a major shipping network in 1921 when the Alberta and Great Waterways Railway reached Waterways near Fort McMurray, making it the northernmost point on the North American railroad grid at that time. Cargo for destinations farther north was shipped to Waterways and transferred to barges, after which fleets of tugboats took them up the river to destinations in the Athabasca and Mackenzie River watersheds. Barge traffic declined after 1964 when Hay River, on the Great Slave Lake in the Northwest Territories, became the northern terminus of the rail grid.

Owing to its proximity to the Athabasca oil sands, the river has seen significant amounts of energy infrastructure constructed along its course. On June 6, 1970, a pipeline operated by Great Canadian Oil Sands, the precursor to Suncor and the earliest commercial extraction operation, ruptured near the banks of the river. The total spill volume was estimated by Great Canadian Oil Sands at approximately 1,190 barrels of oil.

An independent study has concluded that the Athabasca River contains elevated levels of pollution downstream of the Athabasca oil sands. Testing has shown this portion of the river contains mercury, lead, and 11 other toxic elements.

On October 31, 2013, a pit at the Obed Mountain coal mine spilled, and between 600 million and a billion liters of slurry poured into the Plante and Apetowun Creeks. The plume of waste products then joined the Athabasca River, travelling downstream for a month before settling in Lake Athabasca near Fort Chipewyan, over 500 km (310 mi) away.

The river was designated a Canadian Heritage River for its importance to the fur trade and the construction of railways and roads opening up the Canadian West, as well as for its natural heritage.

The Canadian Heraldic Authority named the position of Athabaska Herald after the river.

All content from Kiddle encyclopedia articles (including the article images and facts) can be freely used under Attribution-ShareAlike license, unless stated otherwise. Cite this article:
Athabasca River Facts for Kids. Kiddle Encyclopedia.